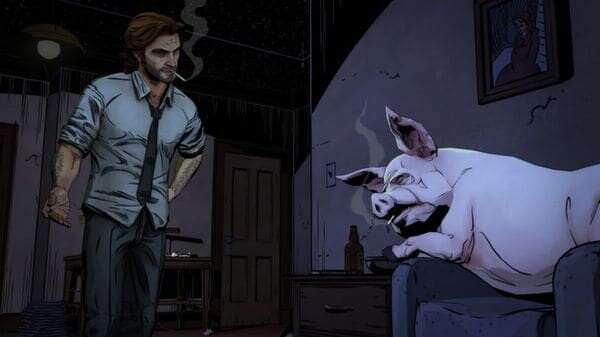 Game Name: A Wolf Among Us

NOTE: THIS REVIEW IS CERTIFIED 100% SPOILER-FREE

Telltale has been at this a while now – the point and click adventure – but since the beginning, circa 2005, they have been pushing the envelope in the genre; Bone and the Sam & Max series used 3D characters with full character animation, that would walk, albeit awkwardly, around a number of connected static environments, looking for clues. TellTale had a lot of practice with the wacky investigative duo, and surely this provided a very powerful basis for learning how to improve their form. They then applied this to CSI – a very popular TV show at the time.

Their next license was the popular claymation duo Wallace and Gromit, and subsequently larger Hollywood fare like Back to the Future and the more ambitious Jurassic Park. Jurassic didn’t fare quite as well, but again this is because Telltale were trying new ideas, and in this iteration, they implemented something akin to action sequences – let me repeat that – timed action and combat sequences within a point-and-click adventure game.

Then they finally found their critical sweet spot with the Walking Dead IP. What happened here was that the puzzles shifted from discovering things in the world, to discovering things within one’s own emotional and moral compass. Decisions were hard, and the consequences dire. No one was spared, and the shocks and thrills came often.

Walking Dead was named game of the year by more outlets than I care to count. While the second season is in development, Telltale has launched a new franchise – A Wolf Among Us, based on Bill Willingham‘s beloved Fables series of comic books published through Vertigo. The full set of parties credited here are Telltale, Vertigo/DC Comics and Warner Bros. Entertainment.

For many years there has been a raging debate about whether interactive narrative fiction, with a so-called “linear” path qualifies as a game proper, and never has this line become more blurry than in the past few years with titles like Dear Esther, The Stanley Parable and Gone Home really pushing the definition. In fact in our very own 2012 GotY list we excepted such titles because we wanted to focus on more “pure” gameplay mechanics. However, we did so with great reticence and only because we needed to focus on the hundreds of new titles that came out – thus by drawing attention to this fast evolving narrative genre, we could identify and spotlight the titles, without having to rate them against games like Teleglitch and Natural Selection 2.

But there is no question in my mind that what Telltale is making are in fact very real games. The argument that they are “linear” or on “rails” doesn’t hold water when one considers Super Mario Bros., or Final Fantasy. It just doesn’t make any sense. So having said all that, let’s talk about what The Wolf Among Us, is…

The Wolf Among Us: What We Think

It is a grand achievement; an astonishingly beautiful neon-palette over authentic inked-comic feeling environments and characters that appears both two and three dimensional at once. The mechanics have been improved over even the Walking Dead – with characters movements less jerky, transitions between areas smoother, and the action sequences even more real-time and pulse pounding than before. But let’s be clear – this is not Devil May Cry action I am describing, but something more akin to Dragon’s Lair where it’s all about timing and precision that leads to a variety of different cut-scene style outcomes.

What really makes this an extraordinary title is the production value, in all respects – the voice acting is absolutely the best out there, the writing is gripping, fresh and fearless, and it is a worthy adaptation of the author’s universe.

Several years ago, with Jurassic, I was admittedly a little worried for Telltale; audiences and critics complained about the awkward timing of the new mechanics, that the game was unsure about whether it was an action or adventure title. Now with the floating, contextually-relevant reticle technology iterated several times over, I am quite certain that no one could handle a Fables adaptation better than this developer.

Once Upon Dark Times

In the world of A Wolf Among Us known as Fabletown – the Fables walk among the “mundies,” in a part of upper Manhattan. You play as Sheriff Bigby, aka the Big Bad Wolf, who is forever trying to prove that he has become a – well, not nice guy, but at least a lot nicer than bad. You will frequently make choices with the idea that you want to prevent letting your dark side loose, and this will be tested at every turn. His job is essentially to keep the peace, and ensure that the magical folk are paying for their Glamour – a type of magic that camouflages them from the mundies. The fables that can’t afford Glamour get shipped to upstate New York to a place called The Farm.

If you have not read the ‘FABLES’ comic series, you will still be able to fully enjoy the world at play here; the game takes place 20 years before the first issue of the comic, and has been designed and written with new readers in mind.

Keep Those Tempers Under Control

Telltale has continued their use of the “People’s Choice” meter at the end of each chapter that shows you how you decided in contrast to the rest of the players in the world. It is very interesting to see whether your moral and emotional choices fall with the majority or minority. I love this feature, and it is the reason you will see the game connecting to their servers when you launch the title.

Controls are identical to The Walking Dead, with some new nice improvements; using a controller you can now use ‘RT’ or the right trigger to walk a bit faster, and in response to user feedback, the game offers the option to invert the control scheme. The developers caution however, that because they emulate mouse movement, the inverted controls may feel and behave a little strangely, but they encourage you to try it out and see if it feels better for you.

Another nice modification is that during action sequences, wherein you are prompted by a red circle to act, usually by moving the reticle over the circle and pulling the right or left trigger, you no longer have to be uber precise like you did in Walking Dead. Instead, when you are prompted, simply moving the reticle in the general vicinity of the action prompt will engage the action. This forgiving change makes the game more playable and allows taut action sequences to play out more cleanly, all of which makes for a more exciting experience overall.

The music is incredible; beyond the superlative – it’s a modern, electro ambient score with touches of blue note jazz and urban flare, and I immediately wanted to load it onto my iPod.

I swallowed the whole first part of the game whole, in one straight shot. And when the credits rolled, I was gasping for more. It’s a somber tale, but one filled with imaginative twist and turns, and a world I fully enjoy discovering like a vintage Eastern European pop up book lost in Gaspar Noé’s Enter the Void.

The game may be about fairy tale characters, but is it not for children. The language, the themes, the relationships are all very adult and intense. If you would not let your kid watch a SAW movie or Requiem for Dream, then this is the same territory. If you don’t have such concerns, then just be aware of what they are getting into.

That said, I am far from a member of the PTA. This is a work of art, of terrific fiction, brilliantly executed. Any stutters, glitches or stops that I encountered I forgive because they are more than likely a function of the engine modulating the mostly real-time story based on your decisions along the way.

A Tale for the Ages

Telltale will ultimately not need our endorsement, because the praises will be piled on, but for what it’s worth, we have watched and played their material from the beginning, and we are so glad to see that they are at the very top of their form, and moving the genre into ever higher standards, exciting new stories are being told through their bold and still-developing technologies and creative work.

Get A Wolf Among Us: Episode 1 on Steam

The game is also available for XBOX 360 and Playstation 3. The Mac version will be available late 2013. 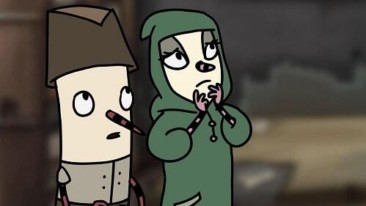 Review: The Inner World by Headup Games and Studio Fizbin 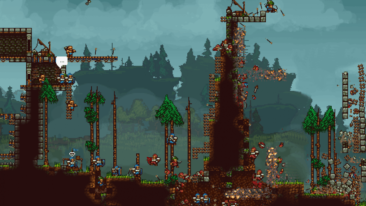