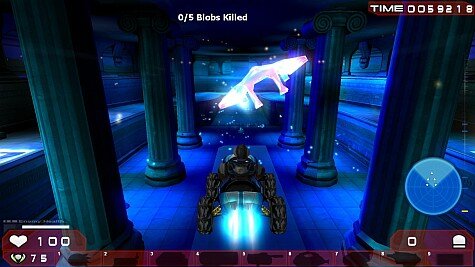 Silas – what We Think:

After spending a few hours with “Silas”, by Exalt Studios, I was left with two analogies: the first is that if “Mario Kart” and “Unreal Tournament” spawned a lovechild after a night of heavy drinking, it would be “Silas”, the second is that this game looks and feels a bit like if you were to trek deep into the Amazon, encounter a previously unknown tribe of jungle-dwellers, and discover that they had created everything in the 1974 Sears Catalog out of things they’d found in the rainforest. The premise behind “Silas” is that, while kart racing games are fun, what they really need is both flight and combat. If you’ve ever played Mario Kart, you will immediately feel at home, even down to the powerslide boost. Now imagine taking Mario Kart and swapping out the characters and karts with, well, less trademarked images. Add a plethora of guns, missiles, and other power-ups, remove mushrooms and turtle shells, finally, top it off with a glider attachment. Welcome to “Silas”.

And now, this is why “Silas” is like a banana-powered microwave.

The game has clearly been a labor of love for the developer, who even went so far as to include a “museum” mode in the game engine, where interested players can walk around and browse through various memorabilia: models, videos, etc. According to the museum, development took place over the course of something like eight years (when the developer was 15 years old), and it was built from the ground up. Earlier versions looked so much like “Mario Kart” that I wonder if changes were made in part to avoid any legal entanglements. The final product is about as full-featured as you can get without having it make you pancakes. It includes single-player and multiplayer (both online and LAN), achievements, a full tutorial, unlockable cheats, and a jukebox section where you can listen to any of the music from the game. It all looks like it was hand-coded, with nothing borrowed from any development kits or pre-made engines. Aside from the “Mario Kart” influence and the presence of achievements, “Silas” gives the impression that it was created in a development vacuum, like if you described a microwave to a hidden Amazonian tribe, and they made one from what they had on hand, a la the “Swiss Family Robinson”.

And this is what makes “Silas” both rather impressive on its own merits, but also a bit redundant. It says volumes about the developer that he was willing and able to single-handedly stick with a concept and bring it from a very basic kart clone to a fairly sophisticated online multiplayer racing combat game. Unfortunately, all of that work amounts to what is effectively a “Mario Kart” mod, but with inferior graphics and no player base.

Besides the redundancy of the concept, there are a few comparatively minor issues with the game. There is practically no backstory, which wouldn’t be a problem except for the fact that, lacking even vague plot, there isn’t any context for the various characters. That probably won’t bother everyone, but I had a hard time dealing with a game wherein robots were racing against young women and furry animals on an alien planet without at least a cursory explanation. At the risk of belaboring the point, Italian plumbers racing against evil turtles and mushrooms is also a little odd, but at least you know why they’re all there.

Another problem I had was with the weapon models. The graphics in “Silas” are geometrically simple. Combined with the creative decision to go with a sci-fi theme, the resulting weapons look too similar. It’s difficult to tell what weapons you have, which ones do more damage and so on. And because there are so many different weapons, the confusion is magnified; fewer weapons or more distinctive models would have been better.

I find myself in the strange position of admiring this game, while being unable to honestly recommend it. “Silas” is an enjoyable, entertaining game, and you can tell that the developer is totally committed to it – a lot of hard work went into it, and it shows. Still, unless you feel an aching need for a sci-fi “Mario Kart”, there isn’t much reason to buy the game.

If a sizeable player base were to develop, the multiplayer might be worth the price of admission, but as it stands it’s not much more than an impressive example of the developer’s dedication. Although it’s a pretty impressive feat, the game itself isn’t worth the cost. Buy the game to support the developer if you buy it at all.

Silas is available at Direct2Drive, Gamersgate, Beamdog, and the developer’s own website

One comment on “Review: Silas – an indie kart racing game”