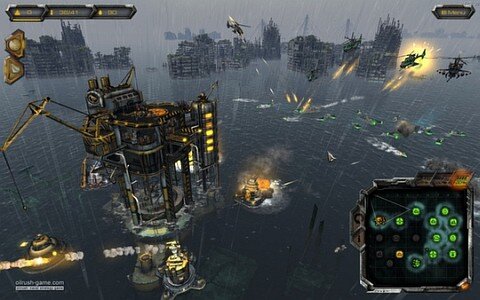 At first it seemed cool enough: a post-apocalyptic RTS/Tower Defense featuring Napalm-dropping dirigibles constructed from trash, flotillas populated by raiders and the pretense of capturing and controlling oil rigs as the objective. Transpose Jetskis in place of Zergs, Anglers as the mortar tossers, Cessnas to attack unguarded platforms and everything looked to be in the right place. There was even a provisional storyline to guide you through the tutorial and into the bigger scenarios. Except that your brief overview missions suddenly shift from increasingly challenging, manageable scenarios to dropping you headfirst into the ocean in a battle so huge and incorrectly balanced that I found myself getting up to make tea before coming back to find out that not much had changed as the AI pinballed its way around the map.

I like me some Defense Grid, a little Starcraft and some Dungeon Defenders, yet in Oil Rush, the turrets you build with oil as the currency to buy them, are ridiculously overpowered. Even when I sent every last vessel in my entire fleet to attack the remaining platform I was kept at bay by a meager five (the max # of) enemy turrets. It took three whole waves to finally fell them. In good game design, there are three levels or phases of engagement: the early levels that anyone can clear that serve as an introduction to the rules of the game, its mechanics, its story, the overall feel and so on. Here, the player feels curious, comfortable, not frustrated, though they have a learning curve to contend with. The second stage is where the player feels engaged, challenged and ultimately despite some minor ass-whippings, rather satisfied and rewarded for overcoming challenges, but never so challenged that they become despondent or feeling hopeless, and never so rewarded that they become bored. This is the ideal phase and the one the game designer wants to sustain as long as possible.

Finally comes the third phase, wherein the player is pushed to the limits and tested on the skills they have developed within the game. Often only the most hardcore, staunch players make it through these final levels, the less devout weeded out, and the sense of ultimate victory, which should never be too certain feels like one big final triumphant ecstatic moment that will be long remembered and perhaps seldom repeated.

Oil Rig is the most insidious type of game – everything looks to be in the right place, and at first one might even start to question one’s own logic, strategy and intelligence as, even early on, the objective continues to fall out of reach. Ultimately, it is a matter of poor design balance.

It started out like a hot date, but by the time we asked for the check, I was thinking “Oh god, I wish I could get those six hours of my life back.”

The Fine Line between Slick and Greasy

The UNIGINE is what affords the player the opportunity to hit a key and jump to a follow cam of where the nearest action is, or jump to a cinematic POV of the most epic battles going on on the playing field. The first option can be sort of useful when you aren’t sure where to jump on the map since you will have various battles going on across the board simultaneously.

The cinematic view option is a mildly attractive but ultimately useless feature in terms of gameplay. Perhaps as something that could be reviewed after the fact it would be taken better, the reason being that I spent most of the time staring at and clicking on the tiny minimap to negotiate my next move. Very little action had to do with the visual feedback I was getting on the screen proper. Maybe it’s a personal preference, but it felt more like a design shortcoming.

In fact, Oil Rush may have done even better if it just made the MiniMap a 1024×768 window wherein I might enjoy managing colored pixel blobs except far less complex or well developed than Atom Zombie Smasher.

Also, I am not quite sure about the voice acting. While it isn’t terrible, the commander seems to always be yelling and angry about anything he is saying. Sure, hard times have befallen all human civilization, but it’s OK to still modulate one’s speech when outlining missions or even making simple opinionated statements.

I still wonder if it’s just me – if I am somehow just not getting the gist of the game, but I consider myself fairly experienced, somewhat intelligent and not new to the genre and yet, I had little less than a painful time advancing through the levels. Maybe if the developer tweaks the balance, HUD and mechanics this will be a standout, but for now, I have to look elsewhere for my diversion (and my sanity).

I give it an extra half point for solid graphic concepts and design.

If you have already had the chance to play Oil Rush, I’d like to hear your opinion on the game’s balance in the comment section below.

Get Oil Rush on Steam

With special thanks to Callabrantus for additional comments in writing this article. 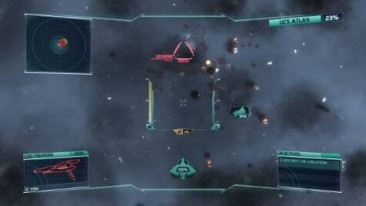 A review of Sol: Exodus – A Sci-Fi Simulator…Don’t Blink 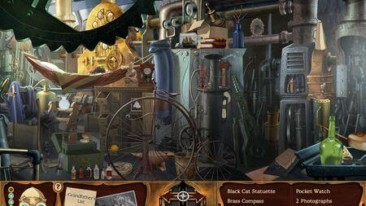