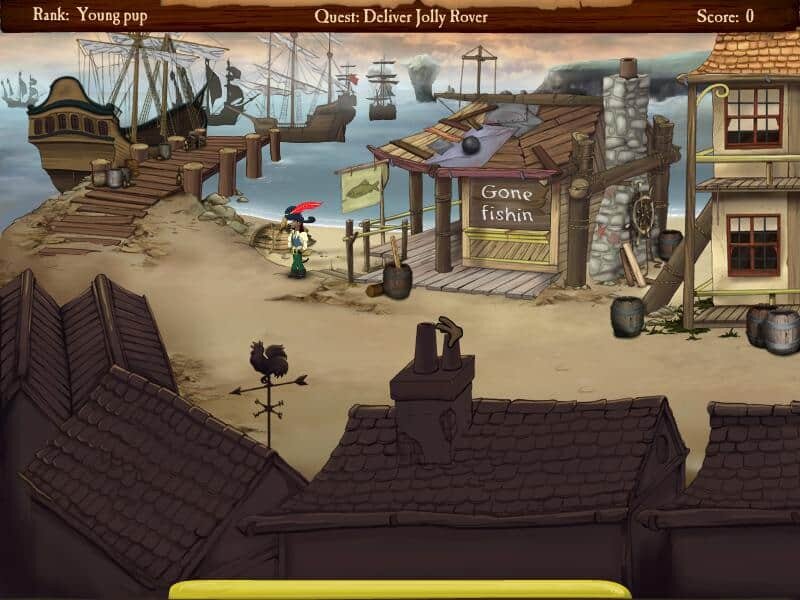 Jolly Rover -What We Think:

Sail the high seas with Gaius James Rover, a sausage dog with big dreams, but nary a point of practical experience to guide his path. Even as the game starts, your ship full of Jolly Rover brew is hijacked, forcing you to find your way out of the cargo hold of a pirate ship. If you want to escape, you’ll have to closely examine your environment. There are clues and useful items to discover, as well as some well-hidden extras for those who love nothing better than to click a room from top to bottom.

What Would Guybrush Do?

It’s nearly impossible to talk about a point-and-click pirate game and not mention the Monkey Island series. The tales of Guybrush Threepwood set the bar high for pirate themed games, and so Brawsome put a different spin on the story by making all of the characters dogs. Seeing as so much of pirate terminology already surrounds dogs, the fit is a natural one. You’ll still find copious amounts of grog-drinking, voodoo, and deceased sailors still chained to the will of the sea, but should there be any similarities lingering, it all comes across as a heartfelt homage.

If you want this story to move along, start clicking. Pick up any items that aren’t nailed down, as you’ll need them later. Anyone who has spent time with classic point-and-click titles will have no troubles solving the puzzles and riddles early in the game. Should you have difficulties later, you’ll have Juan, the balding and slightly senile parrot to help you piece together clues. He’ll give you a general hint, but if you want something a little more custom-tailored, you’ll have to have a stash of crackers with you. You can find these in various locations. I found well over 40 in my journey and only ever parted with three, so don’t worry too keenly about running out. Other locations will have pieces of pirate flags. Find four quarters, and you get…a pirate flag. You were expecting Air Miles?

After reaching cracker and pirate flag discovery milestones, you’ll unlock various extras such as bios and concept art, all of which can be perused from the main menu.  Pay heed to the Quest indicator at the top of the screen.  It will change frequently to reflect what’s going on, and often it will provide hilarious commentary during dialogue sequences.

Daschunds, Daring Do and Daddy Issues

The anthropomorphized cast of canines is well designed, as are the villages and island locales. There weren’t enough animations for my liking (no sword fights? Say it ain’t so!). Gaius will only ever stand, threaten, or recoil (though his swishy walk is hilarious). For the most part, the characters will merely move into place and deliver their lines. Fortunately, the voice cast keeps things nice and lively, and they make good use of a clever script.

Unlike ol’ Threepwood, all Gaius ever wanted was to be a clown in a circus, just like his dad. He clings to that dream, even after pappy was neutered (and made dead) by a stray joke cannon blast to the nads. Now THAT’S dedication.   However, you’ll have to pirate up if you ever hope to rescue (and win the affections of) Clara, the hard-hearted daughter of a deceased pirate. She’s been known to buckle a few swashes(?), and doesn’t take kindly to sissy-dogs. Even on your first play through, the game can be completed rather quickly depending on how quickly you solve puzzles. There are always the bonuses to be found for those looking to get more out of the game. Jolly Rover presents well, and can be genuinely amusing. It isn’t overly original, nor is it particularly difficult, but overall, it’s a decent, charming game.

Game Review – Dream Chronicles: The Chosen Child Merits a Closer Look In More Ways Than One