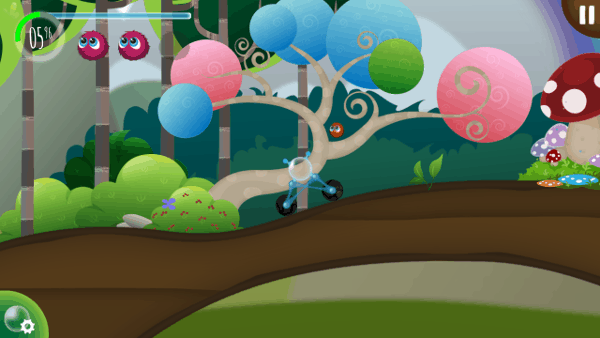 Keebles – What We Think:

Games can change entirely when they give players the ability to create. Games like Little Big Planet and Crayon Physics allow you to solve problems or conquer obstacles using their creation tools.

Keebles by Burnt Fuse, takes that game design concept by giving players the tools to create their own solution to a given level. Creation tools, ideally, can enrich any game’s experience by giving players a tremendous sense of agency, working within the realms of their imagination.

The Keebles have scattered across their world in search of mushrooms, which is quickly becoming a finite resource. Your goal is to collect the Keebles by using the mysterious device known as the Bobble. Using the Bobble and many vehicle parts, you must build an appropriate vehicle for each level and take the Keebles to the mushrooms found at the end of each level.

Beyond which the narrative is sparse, which is unfortunate because I felt the game world and the Keebles could have been elaborated upon to create a more engaging experience.

At the start of each level you are given vehicle parts along with the Bobble. You are then tasked with creating a vehicle using the Bobble as the body of the vehicle. Once you’ve built a vehicle, depending on the wheels you’ve chosen, the vehicle will automatically move forward.

Each level contains three Keebles and collecting them is done simply by running into them with your vehicle. At the end of each level you are then rated based on how many you have collected, how many vehicle parts you used, and how fast you reached the end of the level.

The challenge comes in creating a vehicle that can not only touch as many Keebles as possible, but a vehicle that is capable of getting you to the end of the level. 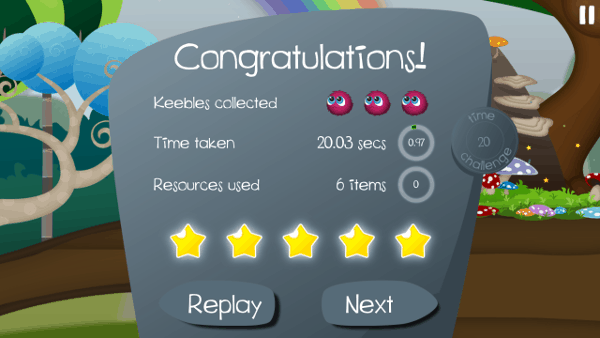 A level doesn’t start until you’ve built a vehicle and pressed the Go button. During the building process you are given a fixed amount of parts to build a vehicle. Parts range from different types of wheels with varying speeds, a device that can alter your momentum by puffing air in a certain direction, and balloons that make you float. Most parts are user-activated by clicking on the appropriate device on your HUD, and then doled out as you progress through the game.

Activate-able vehicle parts help make the game more skilled-based (as opposed to building a vehicle and hoping for the best.) I felt these devices also helped make the levels feel more diverse; there is no one vehicle or device that helps in every level.

It should be noted that vehicles are not strictly physics-based: wheels are self-powered and will roll forward without you having to create momentum.

Building a vehicle is easily done by dragging parts onto a 2D grid. The game mainly boils down to trial and error, which means levels will be replayed more than once.

There are 30 levels and they short but offer a good amount of challenge. I felt like the levels were designed to make the challenge come more from deciding how to build your vehicle instead of it coming from level hazards. 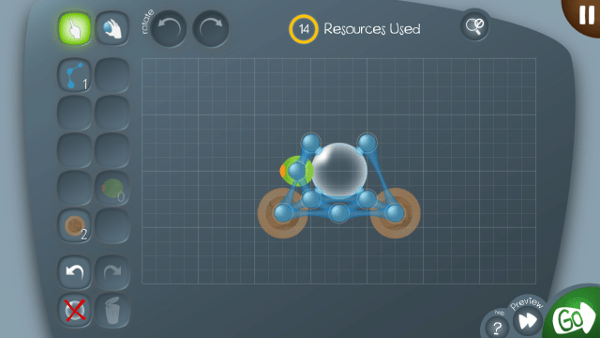 One level, for example, required that I build a vehicle that can safely cross a deadly pit. I had to build a long enough vehicle with many wheels in order to cross the pit safely, collect some Keebles, and make my way to the exit. Another level required me to jump a large gap by using the momentum of my vehicle and an air puffing device.

You’ll be tasked with many different scenarios, which is nice, and makes the game feel less repetitive since environments, albeit very colorful, don’t change up much besides a few color swaps to terrain.

A Drive to Forget

Everything in this game is brightly colored, giving off a cheery, almost childlike aesthetic. I can see how those qualities might turn some people off, though I personally didn’t have a problem with it. The foreground objects are clear and easy to make out. The backgrounds, artificially made to look like they are out of depth of field, are too blurry and end up making the levels of the game less interesting to look at.

The game could have used a more inspired art style, because visually, it is forgettable and rather bland. 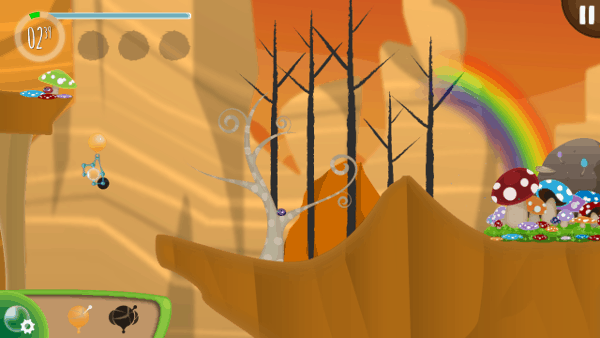 The one issue that sticks out the most for me personally, is the lack of freedom. Yes the game lets you create a vehicle, but you are limited to only certain vehicle parts during each level.

I see the reasons behind this design decision – it’s designed that way to add more challenge – but it also takes away the fun of experimentation and creation. Building ultimately feels too limiting with these prefab restrictions.

The game might be improved by offering a broader range of vehicle parts, then offering more incentive for solving the level with as few parts as possible, or with an unorthodox vehicle design. There were so many instances in which I wanted to create anything I wanted with the many unique vehicle parts found in the game, but was limited by what the game gave me to work with instead of being limited by my imagination.

Keebles is a game that has some design issues that make it less engaging than it should have been. Its lack of an interesting art style and engaging narrative only make the game feel mediocre.

In a lot of ways it’s a puzzle game that requires you to be creative, but only to a certain extent. It’s not a bad game by any means, and offers enough varied levels to keep you playing, but it could have been a lot more fun if it gave you more creative freedom.

Get Keebles from the Microsoft App Store

Vote for Keebles on Steam Greenlight 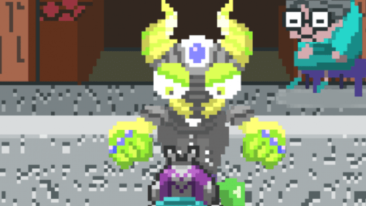 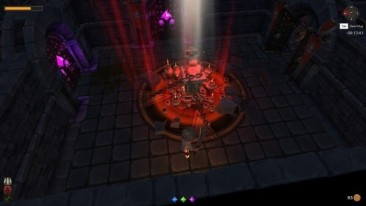