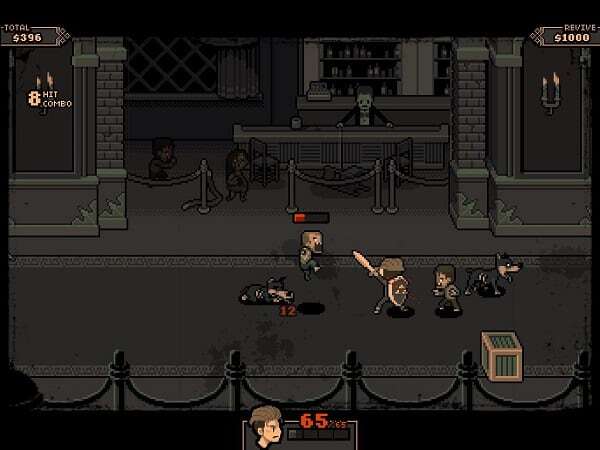 Devil’s Dare – What We Think:

When Benny Arcade Expo 20XX- a wildly popular sci-fi convention and cosplay festival – is rudely interrupted by a slobbering horde of zombies, 4 unlikely comrades must count on each other to survive the onslaught. A mysterious faerie rains magic down upon them, imbuing the quartet with the powers of the heroes emulated by their costumes.

Devil’s Dare is a sidescrolling beat-’em-up that also incorporates permadeath: if you can earn enough in-game currency before expiring, you can keep on keepin’ on. The combat gets tougher and the levels get longer as you progress. The action is just as nuts as the premise, and it makes for an intense (and often hilarious) jaunt sideways. Up to four friends can take up arms against this foul zombie scourge.

The cosplay intro sets the stage, as the game is crammed with gaming and science fiction references. In addition, each of the four main characters are lovingly based on popular video game characters:

Kingston wields a bright, shiny axe of gold (wink, wink), and uses crushing wrestling moves to flatten out enemies. Queenie, much like Terra of FF6 fame, comes complete with a magic-spewing mech: while the size of her mount costs her some speed, she has the power to drain small amounts of HP from nearby enemies. Jackson swings the twin sais of Teenage Mutant Ninja Turtle Raphael, and strikes with speedy attacks. Axel swings a broadsword, Link-style, and can pull enemies closer using a hook and chain (while giving a nod to Mortal Kombat’s Scorpion as he does so).

The initial foes will be of the undead variety, and can be dispatched with ease. Later in the game, sci-fi baddies such as face-huggers start to appear. When numerous foes are littering the screen, picking them off isn’t just trickier; it’s inadvisable.

To earn enough cash to live again (more on this later), swiping at each foe as he comes on screen just isn’t going to cut it: to maximize they amount of cash you collect, you want to obliterate as many brutes as possible, and do so with a special attack. Should your uber technique down one or two enemies, he’ll drop some cash. Rope in and slaughter a third target, and in addition to a larger payday, you can also collect a piece of food that will replenish some much needed hit-points.

Work the crowd by moving quickly about the screen, softening up your marks. Now kite them until they are all within range of a special. The technique takes some practice, but in no time, you’ll be scooping up mad coins amidst a torrential downpour of severed limbs. It gets to be a tougher task in later stages, especially when multiple foes with ranged attacks descend on your position, but bigger crowds can mean bigger bonuses.

And Though You Fight To Stay Alive

You’ll need this cash to purchase upgrades and soul tokens between stages. The former will add flash and boost your attributes, while the latter is the only way to come back to a stage should you fall and not have enough cash to purchase a revival. Boss battles can take you from hero to zero quickly, and having enough cash on-hand to drop in again right where you left off is far more appealing that starting the stage anew.

Deciding to stock up exclusively on tokens might seem like a solid strategy; however, you may eventually reach a stage too difficult to pass with only your base abilities. Watching as your stash of soul tokens gets gobbled up in tidy order on the same stage is the very definition of frustrating (and I speak from experience).

Songs to Eat Brains To

The soundtrack will transport you back to the dimly lit arcades of yesteryear, especially if said arcades were haunted. Each track manages to capture the multiplayer beat-em-up genre, while still capturing the sensation of yelling “Don’t open that door!” at your screen. The digital jingling of dropped coins completes the illusion and had me remembering madly fumbling through my own pocket change to beat the “Continue?” countdown timer. The action is punctuated with voice clips that are often bad enough to make you wince (“Handsome fighters never lose!”), and I’m almost 100% certain that’s exactly how the devs wanted it.

The artwork screams of the bygone 16-bit gaming age, though the palette has been muted. The use of muddy tones throughout casts an otherworldly pall on the visuals. Keep an eye out on the ground as you progress and you’ll no doubt recognize some of the more famous dismembered corpses strewn in the wake of the zombie thrall.

Ultimately, it’s all about staving off that nasty perma-death. You can leave the game at any point and pick up your save file at the start of the last stage you played. Should you die, however, and find yourself unable to purchase another try, your game file gets the axe.

And it is precisely this aspect that adds so much intensity to the play experience. You might well be dominating the denizens of the undead realm in one stage, only to have it all uprooted in the next. As the difficulty spikes, any victory you manage to eke out will be hard fought.

Devil’s Dare has it all: action, nostalgia, and wildly inappropriate pixelated blood splatter. Whether you and three friends take on the undead, or you go it alone, add this game to your list of Halloween gaming traditions.

Get Devil’s Dare on Steam 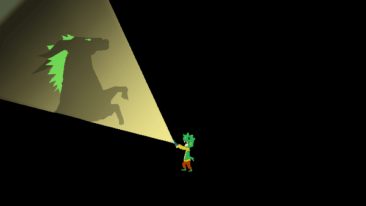 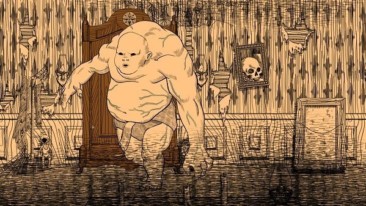