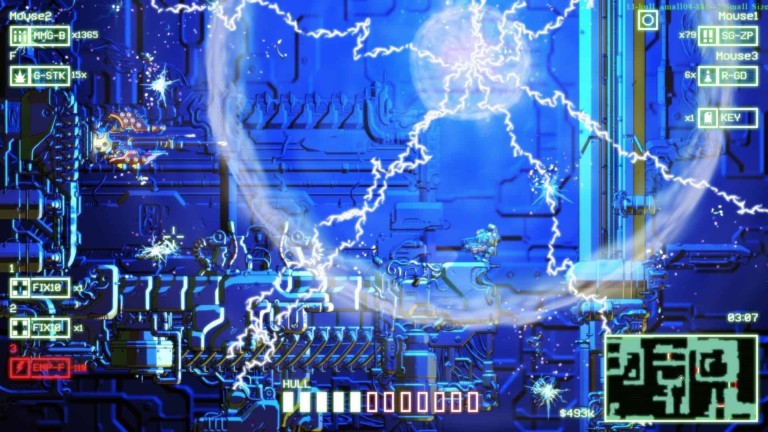 Now out of Early Access, Cryptark fully realizes the potential IGR writer HappyWulf saw in his Early Access review. Ostensibly a twin-stick shooter, Cryptark requires as much – if not more – careful planning as it does quick reflexes in order to succeed, and the entire package is wrapped up with a brilliantly executed graphics style that builds on development studio Alientrap’s previous work. 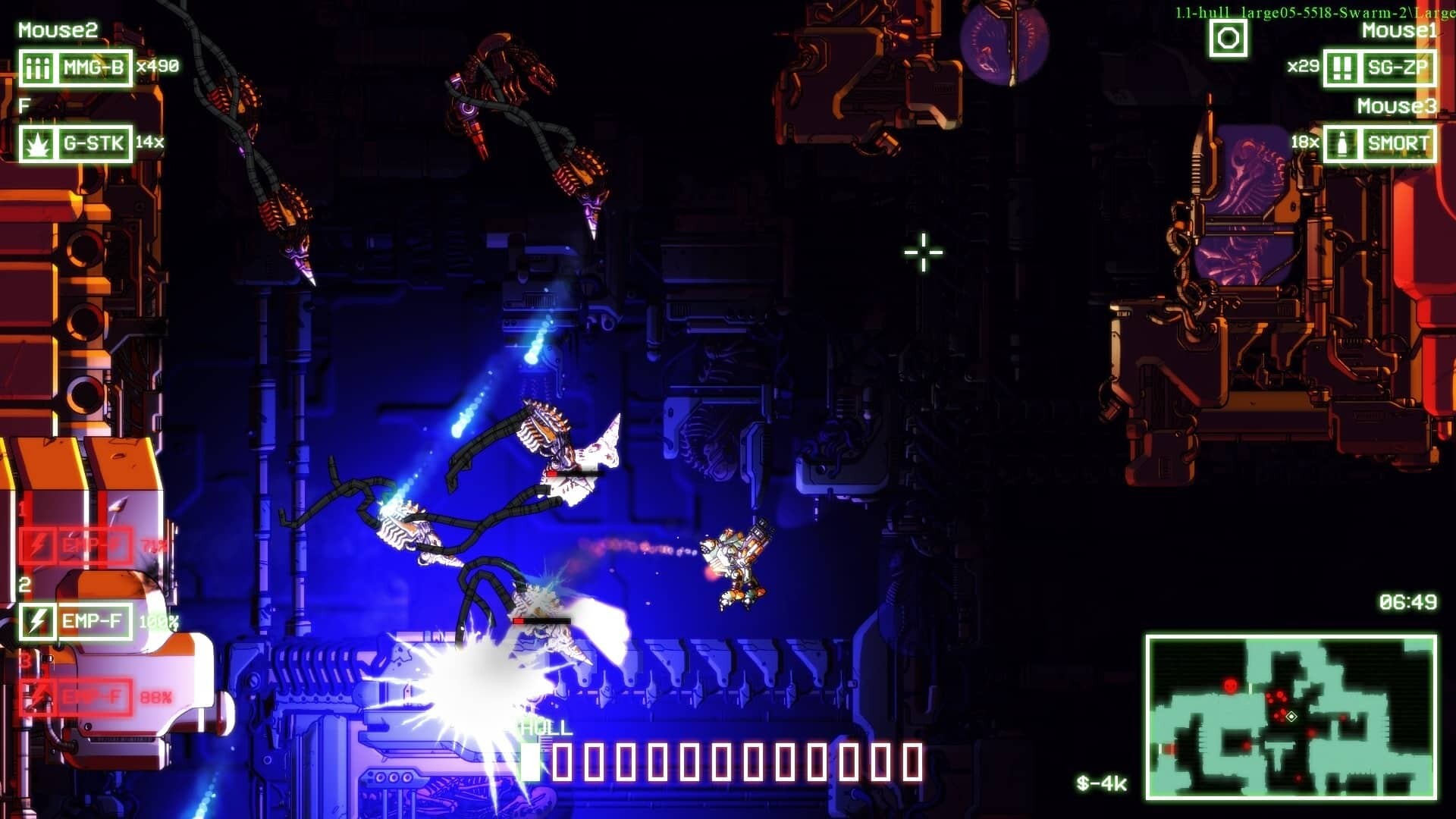 With its storyline of a mercenary crew plundering abandoned but still dangerous spaceships, Cryptark comes off, at first impression, as a bit like an action-oriented, space opera take on Duskers. The same creeping dread of what lies on the other side of each wall or doorway persists, and the empty ships are protected by all sorts of dreadful horrors, from turrets to tentacled drones.

The difference? Cryptark moves a lot faster, and when a ship’s defenses are bearing down on you, you might have a chance to fight back, thanks to a wide variety of weaponry ranging from machine guns to missiles to the deadly “ripper saw,” with more unlocked as you progress from ship to ship in the ghost fleet. 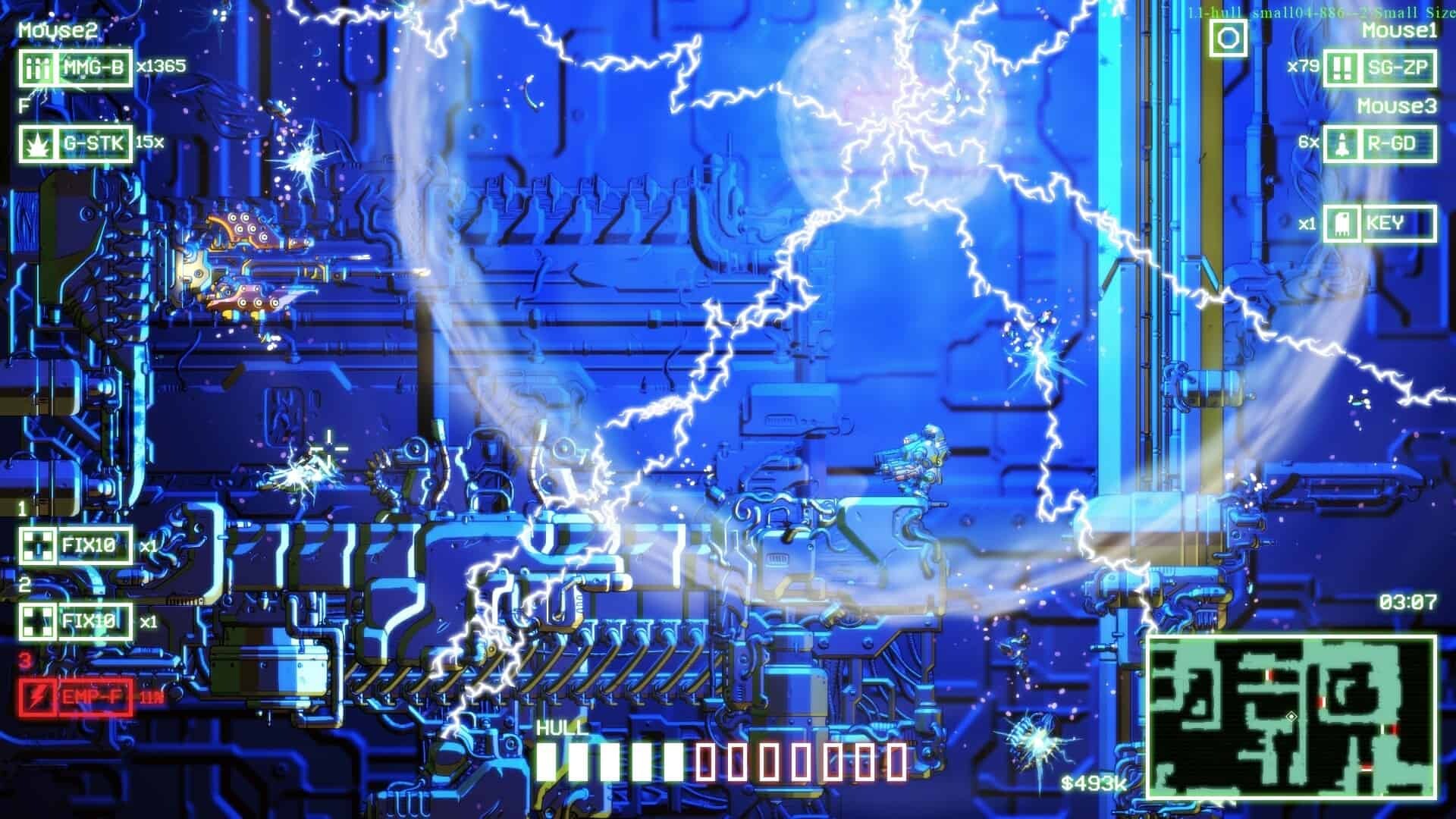 Reflexes aren’t enough to save you, though, and often discretion is the better part of valor. Thankfully, in addition to kitting out your “pioneer suit” before each run, you’ll also most likely have a map. That not only helps you plan your route, but also which of the ship’s automated systems to hit in what order before tackling the “central core” that serves as each level’s final goal.

Map things out carefully enough, and you might even get through without much combat. (Of course, if the ship in question has a sensor jammer in place, you won’t be able to use the map for much until you take it out.)

The gameplay is well-rounded, rewarding both planning and arcade reflexes, but more than that, Cryptark is gorgeous. Alientrap’s previous games Apotheon and Capsized both stood out with stunning graphics, and studio creative director Jess McGibney seems to keep getting better with every game the company releases.

Consisting of 2D sprites given an almost 3D quality via dynamic lighting, Cryptark’s backgrounds and enemies draw heavily on H.R. Giger’s biomechanical horror style in the Alien franchise, but other influences are present as well. Metroid is an obvious reference with robotic, slime-spewing jellyfish and the disembodied brain tissue that makes up each ship’s central core, and fast-moving cephalopod enemies recall the flying cybernetic squid from the Matrix series. 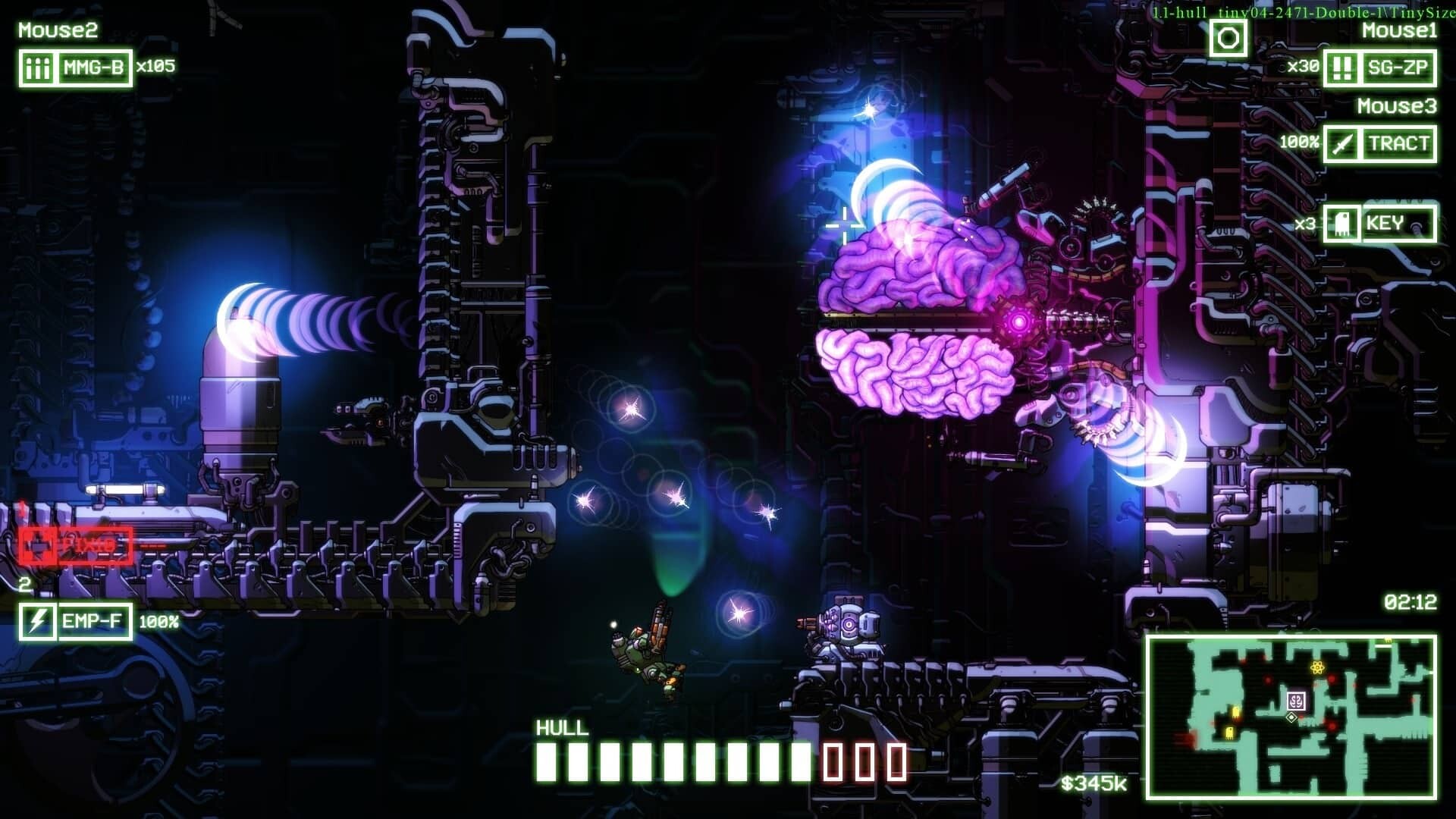 Brief illustrated cutscenes with voice actors give a sense of place and purpose beyond the basic “blow things up” narrative – though admittedly the plot doesn’t go beyond “blow things up because you’re being paid to by shady benefactors” – and a sense of Star Wars-inspired space opera that slightly mitigates the creepiness of fluid-filled, drone-spewing alien coffins and giant pulsing brains.

‘Til the Money Runs Out

Though it’s in some sense a Rogue-like, Cryptark doesn’t employ permadeath quite so much as “perma-broke.” Each run costs money – and the more weapons and armor and accessories you pick, the more it costs – but you can keep making attempts until your bank account is drained. And secondary objectives, like leaving certain systems intact or forgoing the use of specific weapons, bring with them bonus cash. 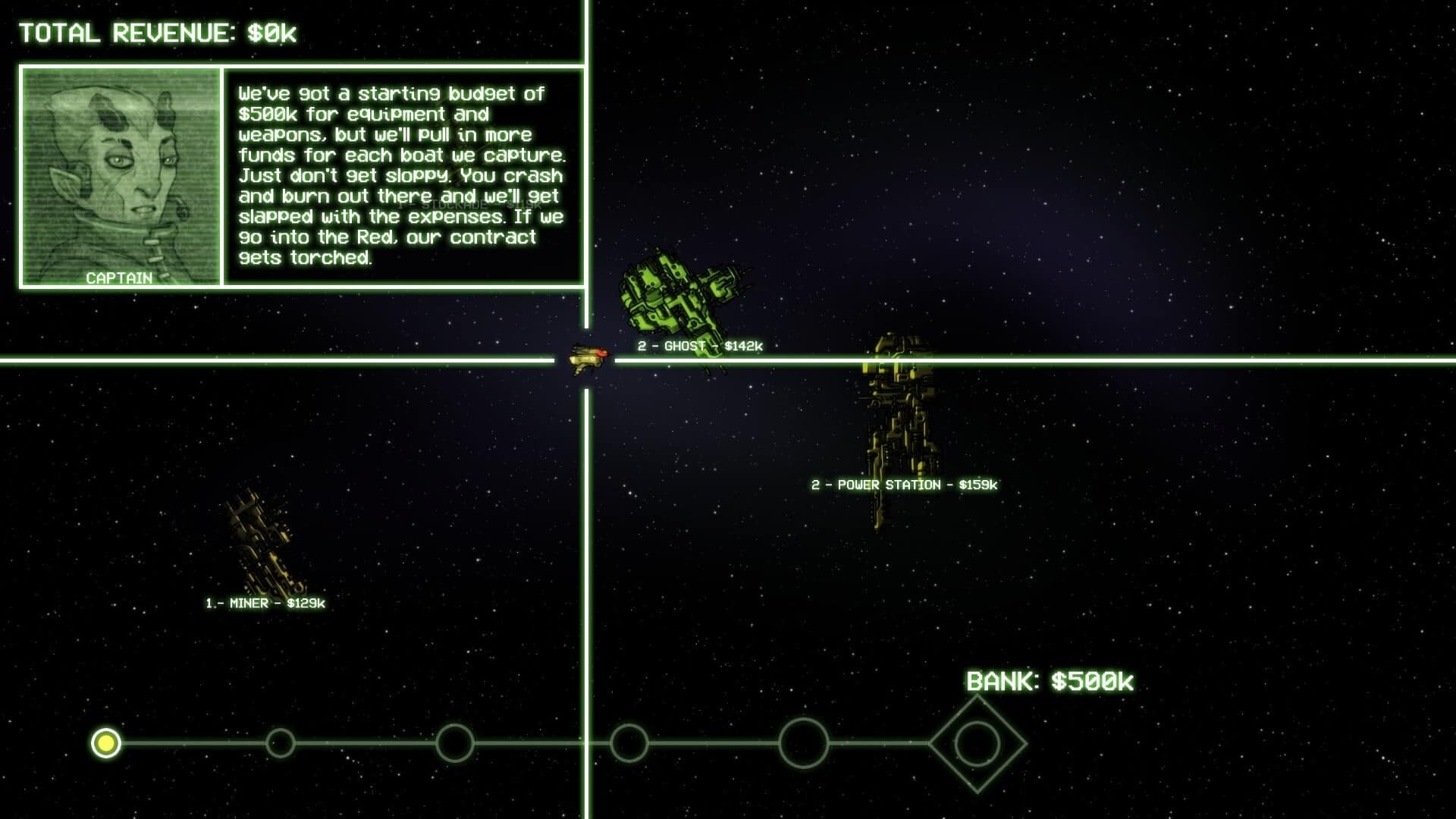 That adds to the fun, because each run becomes a balancing act of risk vs. reward. Go right to the central core and get out as fast as you can, or try and collect as many additional weapons and secondary objectives as you can, knowing that the longer you stay the worse your odds of surviving. I don’t think I’ve played a game that’s handled that tension this well since Invisible, Inc.

Between its stunning graphics and beautifully balanced mechanics, Cryptark is a joy to play, and each loss, rather than frustrating me, just tickled that urge for one more quick attempt. With a more arcade-style Rogue mode as well as the ability to play local co-op, it’s also loaded with replay value. Shooter fans especially will love this, but even though you can play it as a high-speed twin-stick explosion-fest, you don’t have to, so stealth and strategy fans should find plenty of fun here, as well.

Cryptark is available via Steam.

Watch the official trailer for Cryptark below: 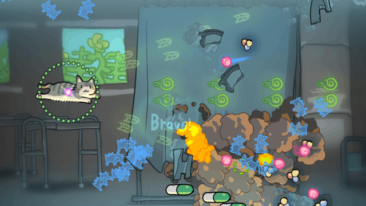 Neko Navy Review – Not All Cats Have Nine Lives 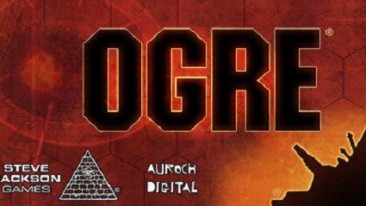