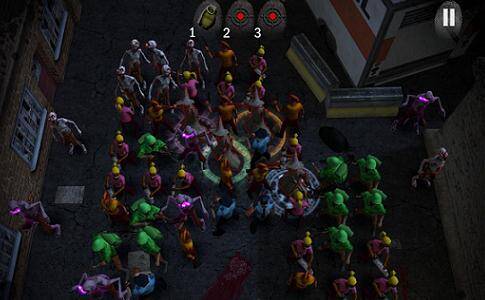 Containment the Zombie Puzzler is an action puzzle game for PC and iPad. The goal of Containment is to surround zombies with survivors of the same color. The zombies have the ability to fight back, as well, infecting your survivors if you do not eliminate them in time. Throughout the game you will use your wits, items you find you along the way, and even the town around you to survive the outbreak.

Puzzle gaming has seen some impressive entries in the last few years but it’s fair to say no one has approached the genre with quite the same angle that Bootsnake Games have. Containment: The Zombie Puzzler is a top down puzzle game following the theme of surrounding a particular kind of tile with another type. In this case, however, you’re trying to surround zombies with one of several kinds of survivor in order to kill the brain-hungry fiends before they spread.

The centrepiece of Containment: The Zombie Puzzler is a sizable campaign spread across three acts with five chapters each. Within each chapter of the game there is a good set of challenges and overall you can expect the story mode to offer around two hours of entertainment. There is also a survival mode you can turn to once you have completed the main game.

The basic gameplay principle of Containment is in the name; contain zombies within groups of survivors. When the game starts you’ll be presented with a block of people- the majority being survivors and the rest zombies. There are four kinds of survivor, each with a distinct colour: green soldiers, orange punks, pink scientists and blue police. You can move non-zombies around by selecting a survivor and choosing another to swap them with. Using this method the player must surround zombies with one of the four types of survivor; once this is done the group will execute all zombies caught within the area. The concept may seem simple at first but zombies are slightly more animate than your standard puzzle game tile and they have a bad habit of turning your survivors into more zombies. Over time one zombie can spread the infection far across the group of survivors and what looked like a simple task can escalate into a nightmare. To ease the challenge you are awarded with various powers for surrounding the zombies with each kind of survivor. You can gain a sniper shot which kills one zombie instantly, a grenade to eliminate a group and even heavier weapons beyond that. These help to keep things interesting and to ensure that you have an alternative during desperate situations.

The gameplay is further improved through the addition of environmental opportunities and threats. There are many situations where an observant player may find a gas tank to detonate or other nasty surprise that can swiftly destroy a group of zombies. Some features of the environment must be used in order to proceed; generators often power gates or other obstacles that block the path until activated. Surrounding the generators with one kind of survivor turns them on and removes the obstacle. Zombies can also crawl out of nooks and crannies surrounding your survivors so it’s important to keep an eye out for things going on outside of the puzzle arena.

The design work in Containment is of an impressive level with both characters and the environment given considerable attention. One small drawback of the reliance on 3D characters rather than the more traditional icon based graphics in a puzzle game like this is that sometimes it’s hard to be sure you’re clicking on the right survivor- especially as the game expects you to click quite close to the ground when making your selection. The grim but often comical story of the survivors is told through text superimposed on the terrain while the camera swoops towards the next puzzle. The silent manner in which this text imparts the narrative serves to bolster the atmosphere of the game. The story itself is relatively standard zombie fare with a few bizarre twists thrown in.

The sound design for the game is similarly effective and there is a reasonable collection of amusing dialogue clips that play when you successfully kill off a few zombies. Containment has a good sense of humour throughout, punctuating the story with melodramatic narration that is clearly intended to poke fun at the zombie genre in general.

Containment: The Zombie Puzzler is a reasonably short but well developed game. The difficulty ramps up well throughout and there is enough variety in challenges and bosses to keep things fresh and interesting. The survival mode isn’t infinite but it adds length to the game and helps to expand an entertaining and fairly unique experience.

Get Containment: The Zombie Puzzler on Steam

Get Containment: The Zombie Puzzler at the iTunes store 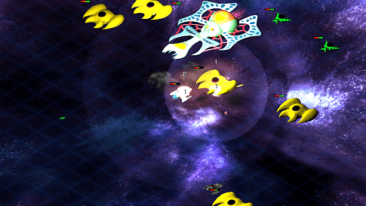 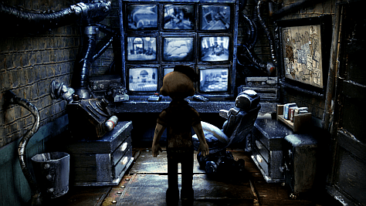