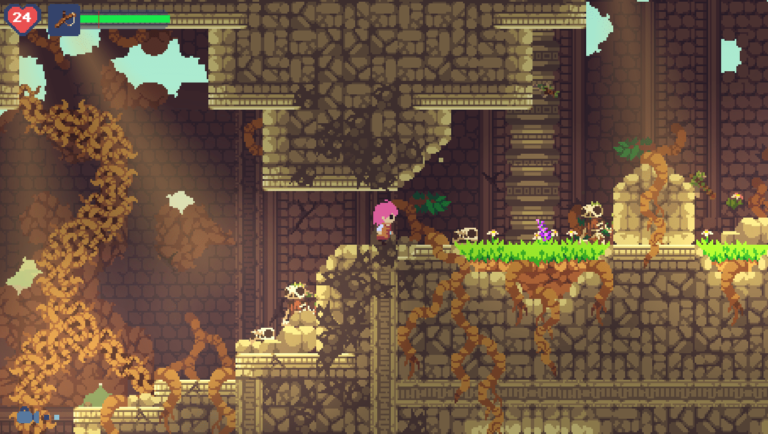 Phoenotopia: Awakening starts off in the humble village of Panselo. It’s the home of our main protagonist, Gail, who is tasked with venturing into the forest to retrieve the village children. 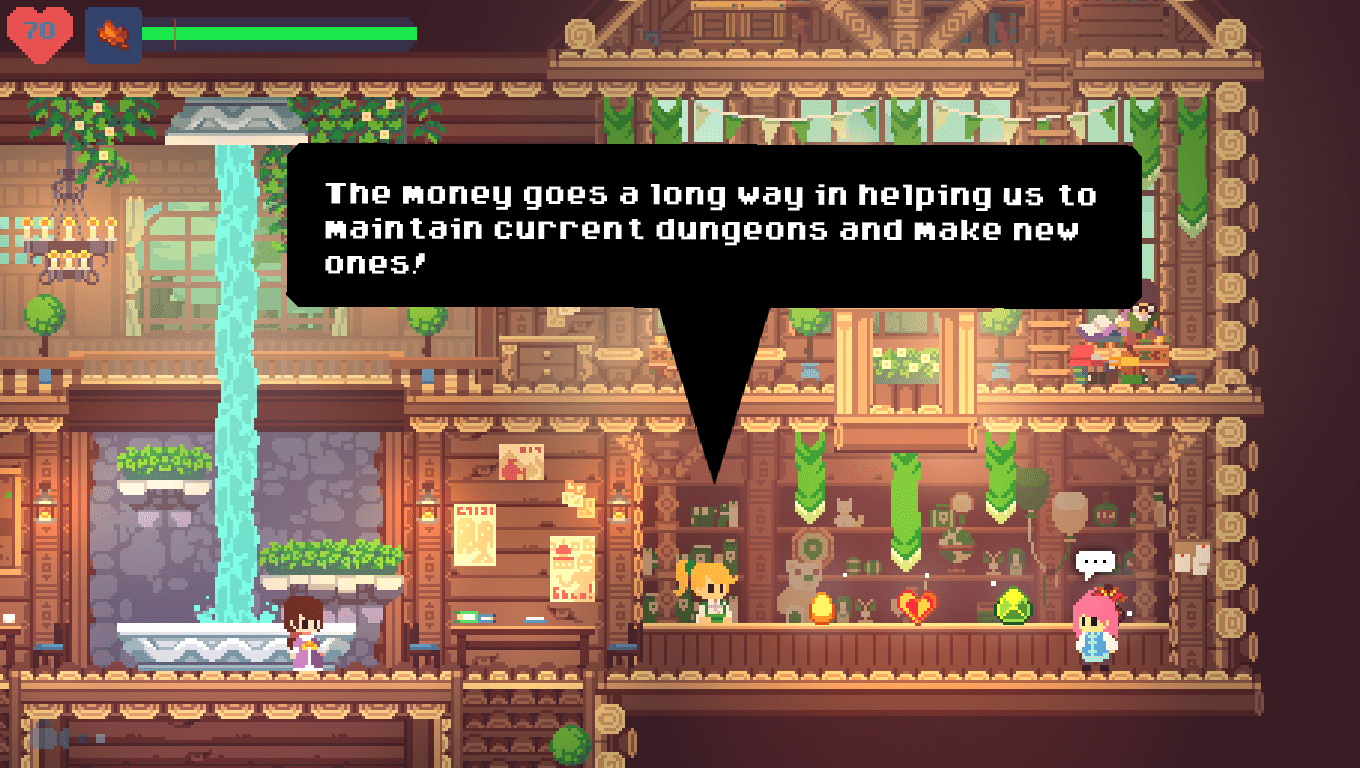 Where Have All the Children Gone?

Gail finds that most of the children curiously ventured into a mysterious ancient temple housing a peculiar object. The object activates upon Gail’s arrival, summoning a spaceship that abducts all the adults from Panselo, so Gail sets off on a quest to figure out what happened to the adults, and see if they can be rescued.

The narrative setup is engaging from the start, and I like how the game really makes you want to learn more about what happened. It initially starts strong, but later, as the game progresses, its narrative takes a backseat to more familiar RPG gameplay.

After the initial starting area, the game sets you free on your quest: no quest log, no map, just freedom to explore the open world. It doesn’t even have auto-saving, instead requiring that you save at specific points, like a 16-bit era game.

It feels very old-school in its design. It reminded me of the 2D gameplay of The Legend of Zelda 2. It’s a really freeing experience that makes Phoenotopia: Awakening feel like a real adventure, not muddled by quest objective markers.

Instead, I had to talk to NPCs who would give me hints on where to go next or whom to talk to. It felt rewarding having so little hand-holding in this regard. This may be a turn-off to some, and I can see why: there were times when I was scratching my head, unsure of where to go next. It’s more challenging this way, though, and definitely gave me flashbacks of playing Ultima VII.

Opening up an Open World

I might stumble across a cave with a rock that can only be destroyed by bombs, for example, or ruins that had a locked door that could be unlocked via a specific song I had to play using my flute. Phoenotopia: Awakening has that Metroidvania trend of visiting areas later to fully explore them, and it did feel rewarding to come back to areas I had made mental notes about once I had the proper equipment.

The game doesn’t have a leveling up system. Rather, you grow stronger via better equipment and weapons. This gives the game more of a focus on finding and spending money wisely.

I found that money is harder to come by, overall, compared to other RPGs, but not so much so that it felt like a grind just to buy new equipment. It’s balanced well, and it really did a great job making me feel like I was slowly getting more resilient.

This game features a fairly familiar-feeling combat system: basically close-range attacks as well as long-range attacks like a throwable spear or a crossbow. Although the combat feels responsive and straightforward, the enemies in this game do a lot of damage. Enemies can be punishing because there is a lack of defensive options in this game.

Overall, I found the combat to be challenging, but completely doable: a rewarding kind of challenge that relies on smart placement and timing instead of button-mashing. 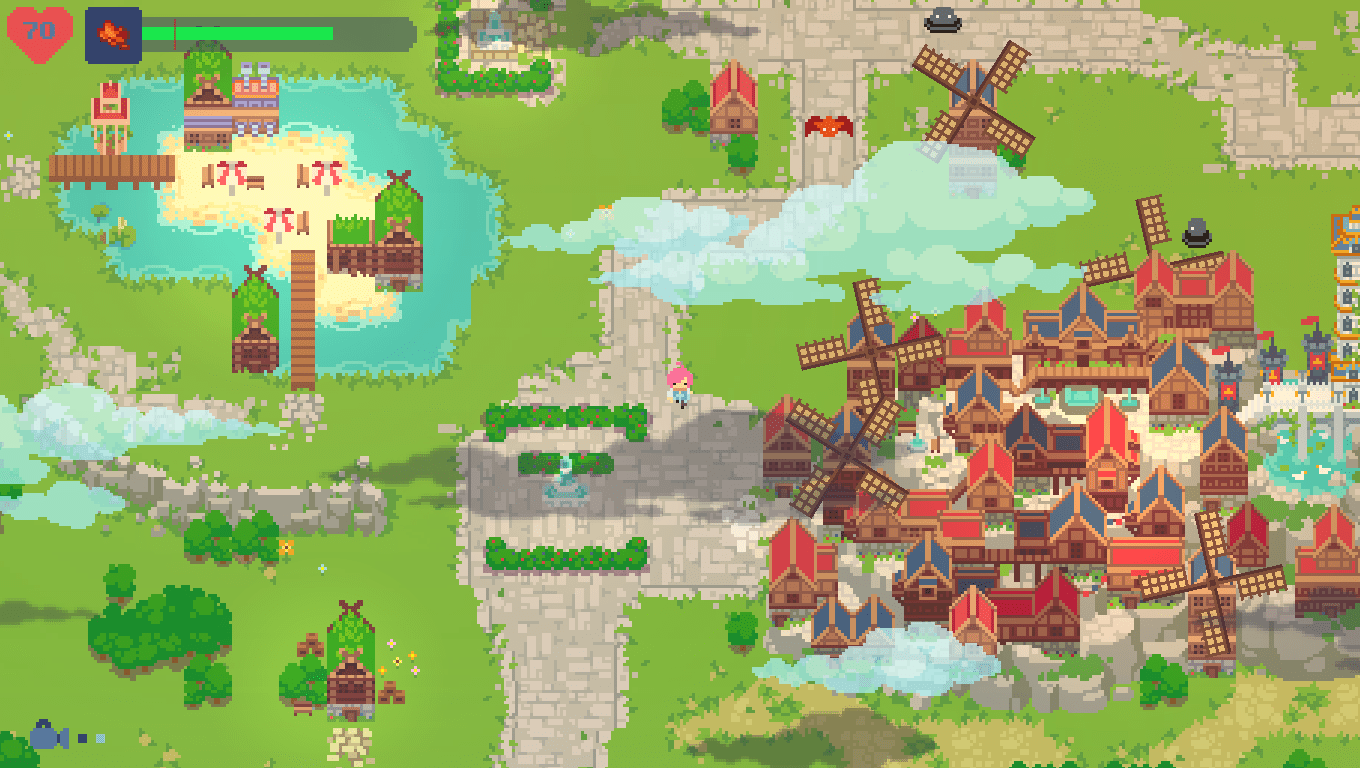 Besides combat, the game has a lot of light puzzle-solving throughout: stacking boxes to reach higher ledges, plenty of switch puzzles and combination puzzles, etc. They are simple enough that I didn’t need a walk-through but still challenging enough to offer some head-scratching moments.

The main combat loop may involve a lot of combat and light puzzle solving, but this RPG also does a good job of not making things feel stale. From side-quests from NPCs to secrets to find to mini-games for rewards, there is plenty to do in this game. It’s a big 20-hours-plus experience.

Visually, the game has a nice pixel-art style. Colors are well utilized to full effect, creating a nicely detailed world. Whether exploring temple ruins or a futuristic science lab, it’s all lovingly crafted. It makes the world a joy to explore and a treat to lose one in.

The soundtrack does wonders when it comes to making each area you visit unique. The 60 tracks are wonderfully composed, utilizing pianos, plenty of synths, and a mix of some chiptune music here and there. It evokes nostalgia but is layered in a way that it also feels modern. It’s a nice mix of tracks that evoke emotion as well as help craft this vast RPG world.

Phoenotopia: Awakening is a lovingly crafted RPG that’s well worth your time. It’s a big, ambitious game that nails that nostalgic feel but still feels modern. Anyone looking for a side-scrolling RPG should give this game a chance.

Phoenotopia: Awakening is available via the Nintendo Game Store and Steam.

Check out the official trailer for Phoenotopia: Awakening below: 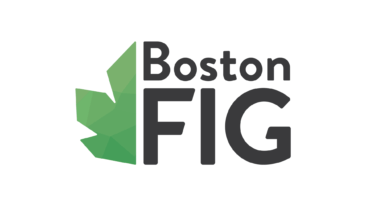 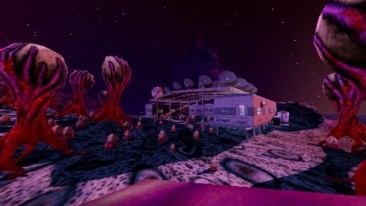