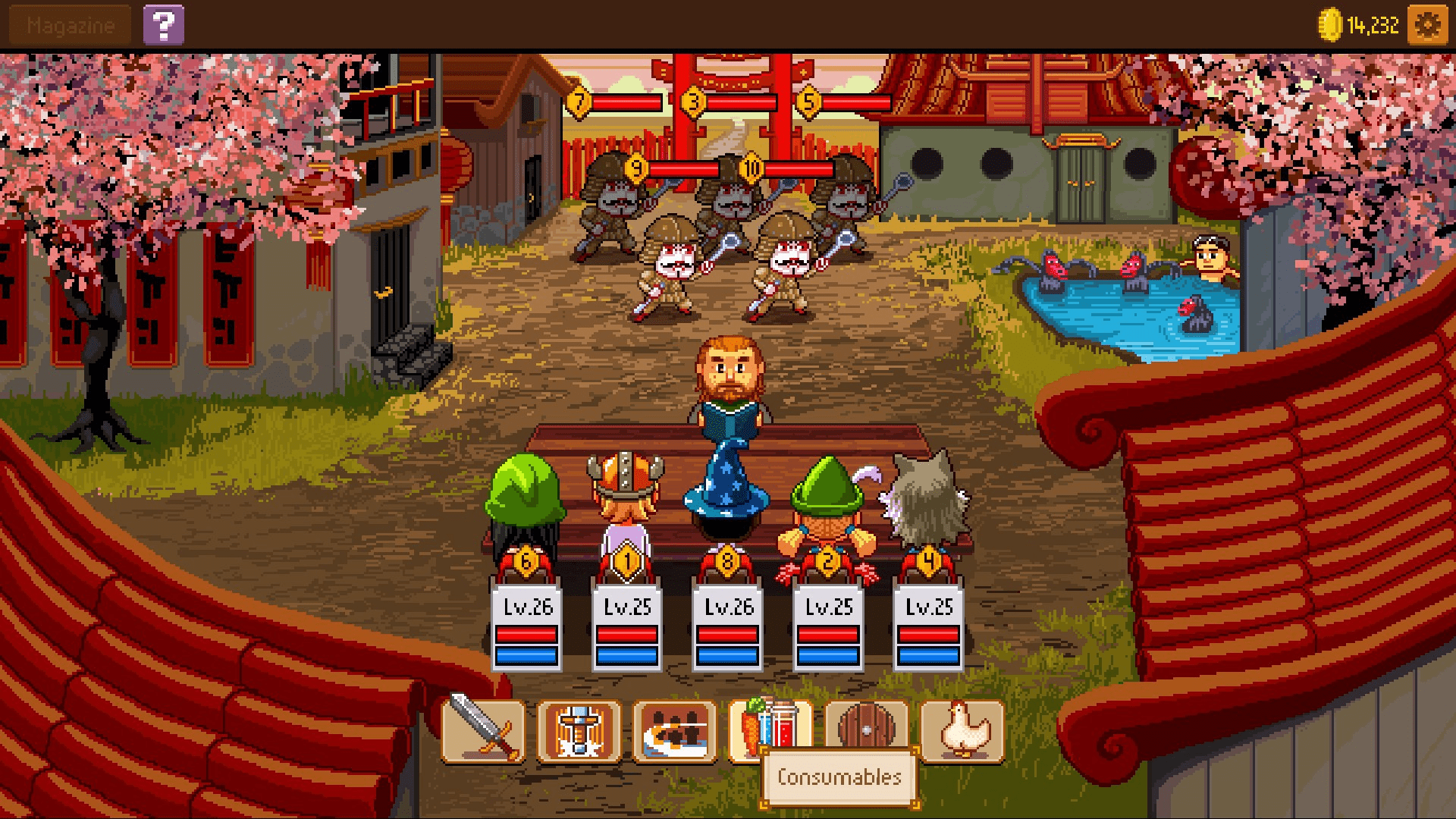 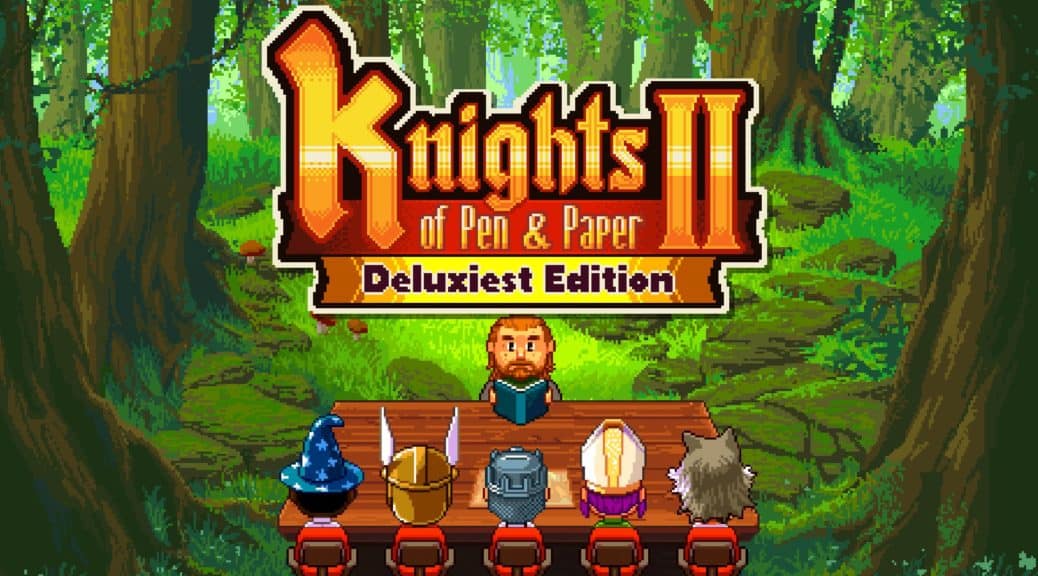 Knights of Pen and Paper 2: Deluxiest Edition by Seaven Studio

Knights of Pen and Paper 2 is a delightful turn-based RPG sequel clearly made by gamers for gamers. You are a normal person from the world of Muggles, sitting at a table playing good old Dungeon and Dragons (all of these proper nouns are my own and not mentioned in the game). Your friend is a dungeon master sitting across from you, sharing witticisms back and forth as your party encounters various enemies and you move from location to location along a map to fulfill quests towards a greater good and higher destiny.

Another name for this game might be “Mystery Science Theater 3000 Presents: Grinding Simulator with Bits of Connecting Plot in Between.” 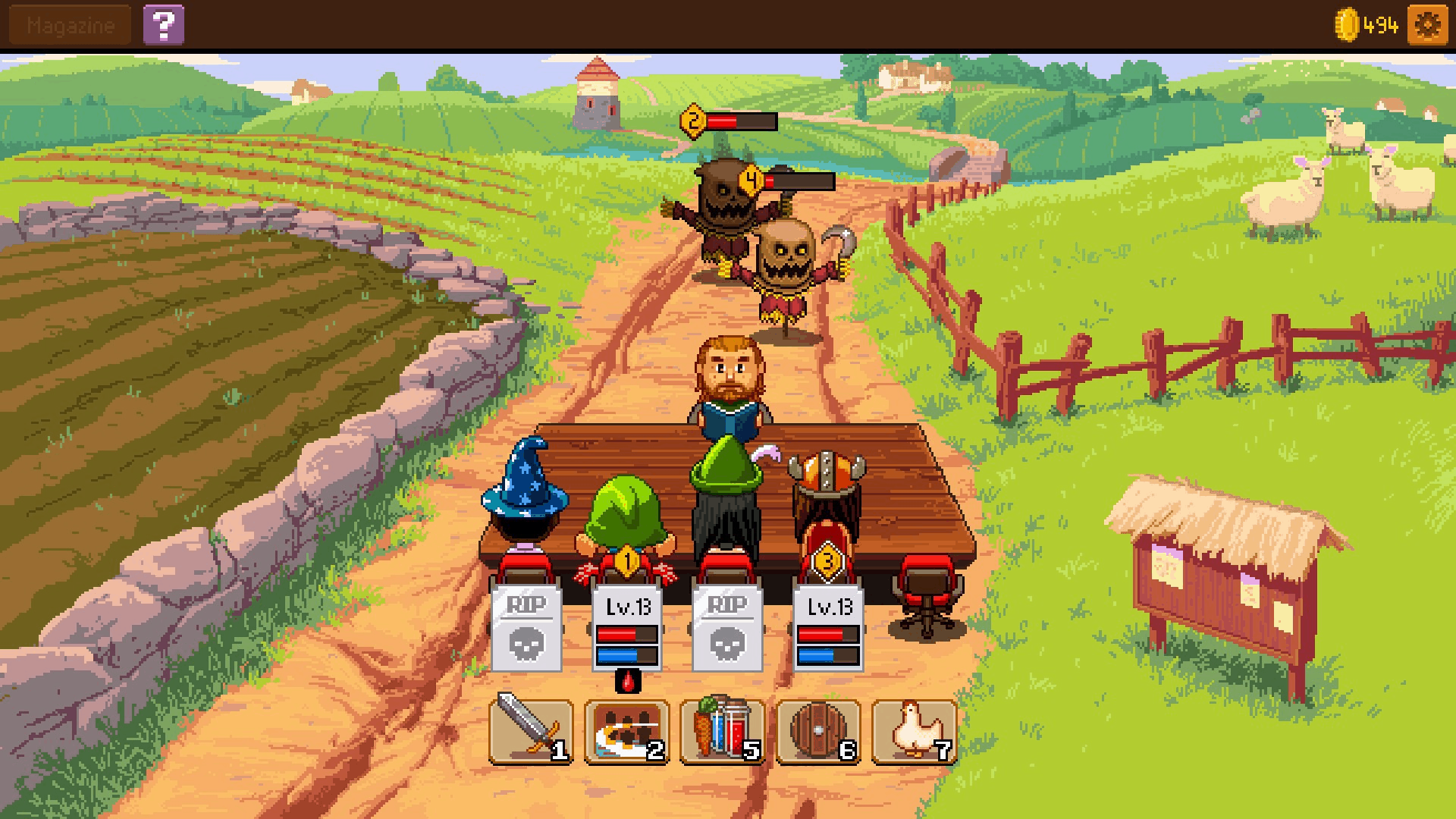 But that doesn’t matter, because it is funny and far more enjoyable than the description might imply.

The game, like many RPGs when you’re getting started, can become quite grindy. I mean…there is a location actually called The Grinding Farm, for heaven’s sake! Even though it’s tongue-in-cheek, it is actually true when playing the game.

At first, I surmised this was not much more than a clicker, with inside jokes for World of Warcraft ex-pats. But as the hours quickly burned away, I became quite immersed with – or re-triggered my addiction to – the many gameplay features on offer: you can deploy trinkets and weapons to each of your characters and decide which of their special skills to level up (skill trees would be even cooler). You can manage aggro (called “Threat”) and use modifiers to change attack order via spells, loot and talents.

It’s great that the local dungeon is procedurally-generated, adding some real interest to a game that might otherwise feel a little bit on rails. The chance encounters that you may face due to the RNG between locations are also moderate but always intriguing.

One Night in the Local Tavern…

Though you begin with only one character, you can eventually buy a full slate, and more options unlock. Once you get to Big Town, there is a tavern where you can bank or swap out characters from your party. These may include a goth girl or a surfer dude who can be a human, dwarf or elf, and play all the standards: paladins, mages – even a ninja – or other classes unlocked from the in-game monthly enthusiast’s magazines. 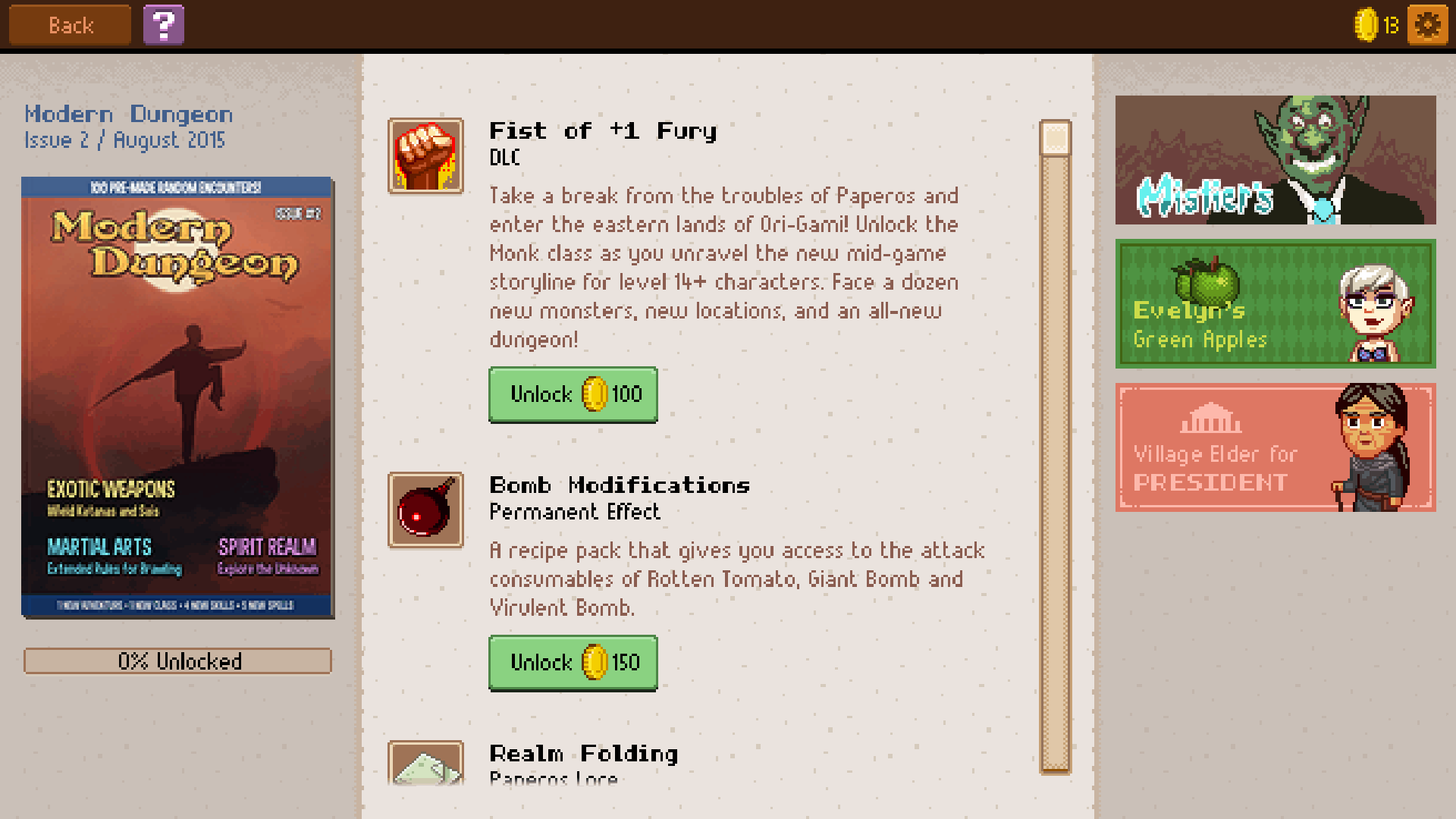 There are actual fail states, and you do have to work your way through some of the problems and the penalties for failing, but they’re fair penalties.

I figured out eventually that I could just resurrect my characters by first clicking the action menu (with the A button on the Joycon) and then clicking down to my desired character. As your toons ding, they get more expensive to rez.

What’s so great about this game on Switch is the simplicity of the interface. I mean it’s so simple there were things I wished for – like the names of the enemies being displayed – but then I remember that this is also showing on a tiny little Switch screen and not always on my big screen TV. There is also a bestiary that lets you cycle back through all of the mobs you’ve encountered.

Speaking of Switch port considerations, I have to say I really love the graphical treatment for when you’re testing against a trap: a small ornate graphic pops up over the heads of each of your players as they make their saving throws, and the little animated graphic is always terrific, though it may be difficult to appreciate in the handheld mode.

The 16-bit graphics are truly just great and whimsical. Request to the devs: it would be nice if when you’re attacked in your sleep that there would be a night scene as opposed to the default daylight scene, which sort of breaks the immersion.

Sound design is good, with the appropriate sounding effects for everything that you hit, find and interact with, and there are lots of sparkles and flourishes and twinkle sounds to really get your dopamine hits, like being in a Vegas casino. 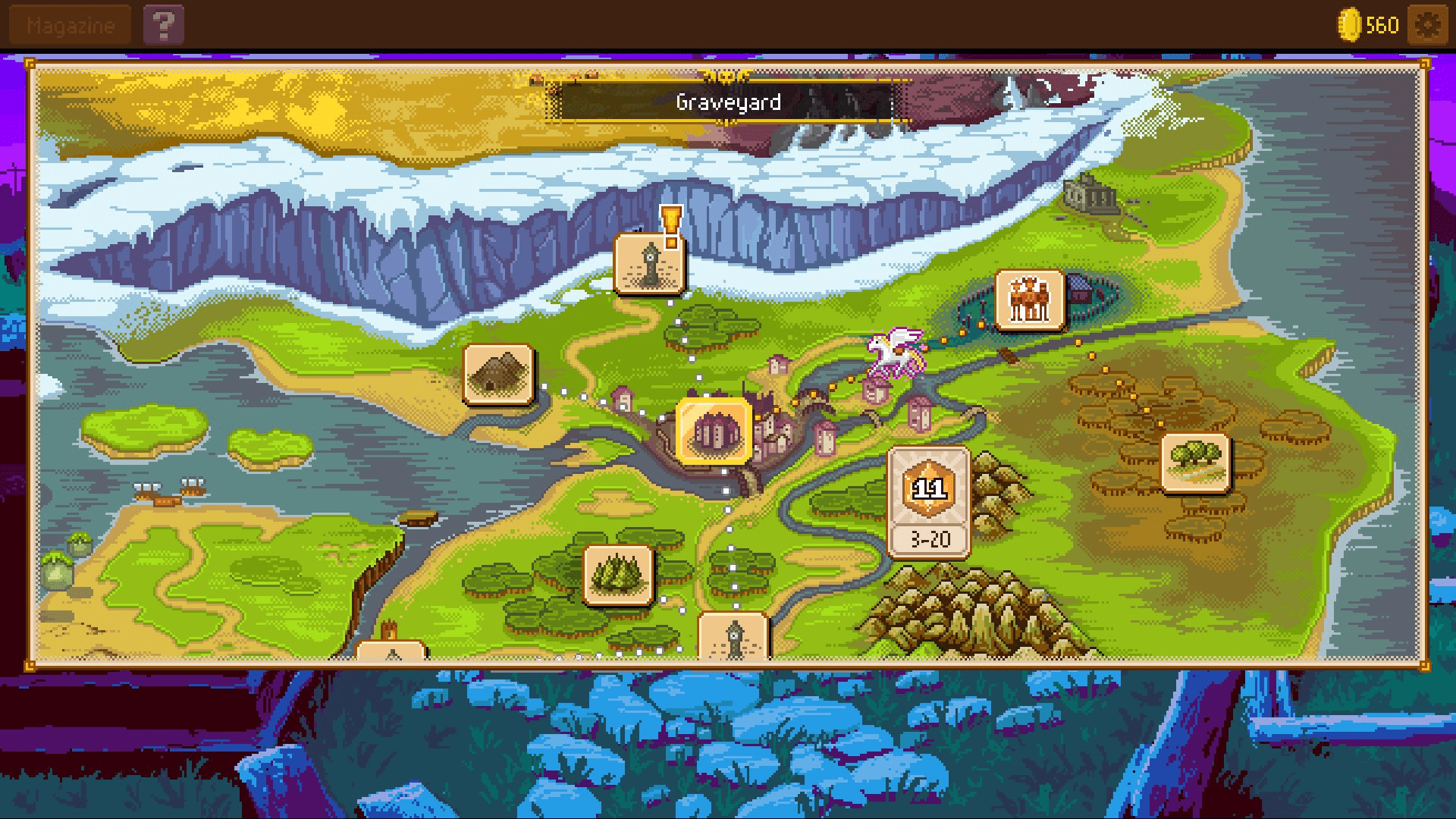 At first I was a bit confused about some of the controls. It would be nice to have a description of exactly how they’re mapped; the settings window only brings up the music levels and the HD Rumbler option (which is off by default, but I recommend turning on if you have the battery life, because the Switch’s haptics are the most nuanced of any gaming device).

But I’ve got to hand it to them. The game is very well balanced; for every pro, there is a counterbalance, and for every negative, there is something that brings you back, and it seems quite well tuned overall. This isn’t just a fly-by-night gag of a game. I can’t see how any gamer of any genre from the past 20 years cannot have fun playing this game – even if just for one or two inside jokes.

Granted, the array of canned verbal interactions can get repetitive pretty quickly, but on that note, this is a game that was clearly made by people who play games a lot, and who love games a lot, and who are paying tribute to their favorite parts without any fat. Knights of Pen and Paper 2 is legitimately funny, with some really true jokes, and every once in a while you almost feel like you’re really playing a tabletop RPG.

For Switch, Knights of Pen and Paper 2 is totally worth it.

Knights of Pen and Paper 2 is available for Switch via the Nintendo Game Store.

Watch the Nintendo Switch trailer for Knights of Pen and Paper 2: Deluxiest Edition below: 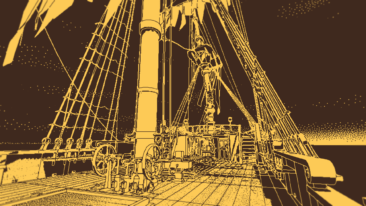 Return of the Obra Dinn Review – Decoding a Mystery of History

Book of Demons Review – Not Your Normal Necronimicon