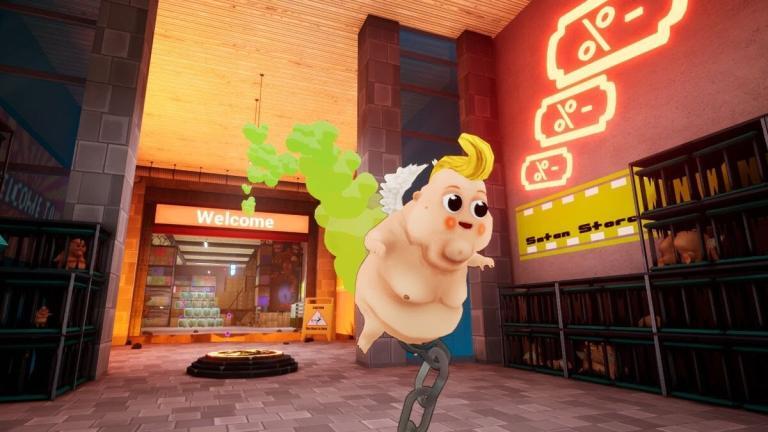 Hell Pie by Sluggerfly is a 3D platformer about a demon named Nate. Nate is tasked with collecting ingredients to help make a pie for Satan’s birthday. He quickly finds a pet angel named Nugget to help him in his quest. 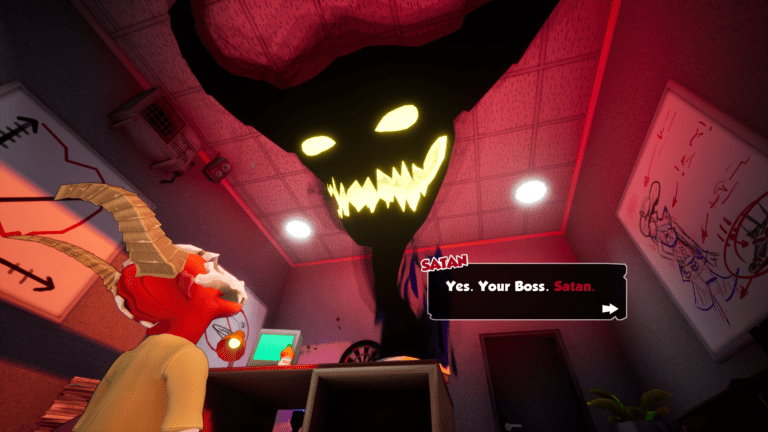 Hell Pie’s narrative premise is simple and ultimately isn’t really expanded upon. There isn’t much in terms of a narrative in this game besides random NPC dialogue along the way, so don’t expect many cinematic cutscenes to flesh out a deeper story here.

The game expands upon its own lore through gameplay instead: finding a factory where they kill humans to turn them into food or visiting a sushi restaurant located inside a whale. Plenty of small touches like these in odd locales help fill the narrative void one would come to expect from a 3D platformer. So not all is lost as there is plenty of interesting places to help create a cohesive world with plenty of small details.

Besides these world-building characteristics, what makes the five hub worlds in this game so fun to explore is that they are so expertly designed. Whether it’s fun platforming sections, boss fights, or other more unconventional sequences, there is plenty to appreciate. Hell Pie kept me guessing and mixes things up so that the hub worlds all have different design elements and structure to them.

Besides the expected platforming obstacles and traps, Hell Pie also introduces more varied sequences. One section had me wielding a machine gun, while another had me being chased by a gluttonous pizza-loving demon. It’s all so well-crafted that I can’t recall a dull moment, and as someone who grew up on 3D platformers like Ratchet & Clank and Super Mario 64, I’ve never stopped playing them. I must say that this game features some of the best level design I’ve seen in the genre.

There are a number of things to find within each hub world. Many hub worlds even have more focused, linear structured levels to them. Collectibles in this game are rewarding to find because they are useful. Currency is used to unlock cosmetic outfits. Lucky Cats are given to a demon to unlock doors. Unicorns are used to unlock abilities like a sprint or the ability to glide. And Candymeat can be used to buy Nugget upgrades which allow for more options when it comes to jumping and traversal. They are addicting to find because they are useful as opposed to just being something to collect.

Great level design is made better if the game has good mechanics. Thankfully this game feels so smooth and polished to play. Controls feel snappy and responsive. Jumping feels satisfying with the right amount of in-air control. With plenty of abilities and unlockables to expand upon its core mechanics, there is plenty to love here.

The game’s main gameplay hook is that Nate can use Nugget to swing-jump in mid-air, which can later be upgraded for more swings. This mechanic makes exploration a lot of fun, and many platforming sections feel less constrained as a result.

I guess the big elephant in the room is this game’s style. Hell Pie leans heavily on crass and crude humor, with plenty of feces, gore, and gross imagery on display. I fought soldiers made of feces in a sewer, collected a used tampon as a pie ingredient, and even visited a club in the jungle hub world filled with NPCs shaped like genitalia. It’s really not for the faint of heart. It’s at times very in your face. But I will say that it’s at least toned down in three of the five hub worlds. 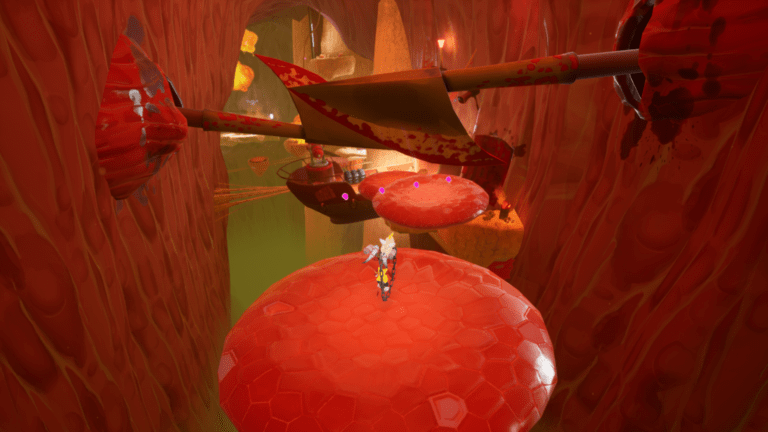 This style can be a turn-off for many, and I can see why. While it’s not my favorite type of style and humor, it was something I quickly got used to. I kind of became desensitized to a lot of it. And even though it wasn’t my preferred design choice, it really didn’t stop me from enjoying everything else I liked about the game.

The Devil Has the Best Music

Sound design deserves a mention. Music is jaunty in all the right places, incorporating a myriad of instruments from percussion and guitars to keyboards and synths. The music does a lot to give Hell Pie a peppy, lighthearted feel. Sound effects for gross things are suitably wet or squishy, while effects for attacks and abilities have a nice punchy bass tone to them. Sound design in this game is great across the board.

Hell Pie is easily one of the best 3D platformers in years. It does lack an interesting narrative, and its off-color humor is not my cup of tea, but its level design and gameplay make it easy to overlook the issues I have with it. If you’re a fan of 3D platformers, give this one a chance.

Check out the official trailer for Hell Pie below: 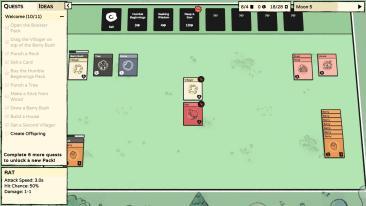 Stacklands Review – Stack Me Up