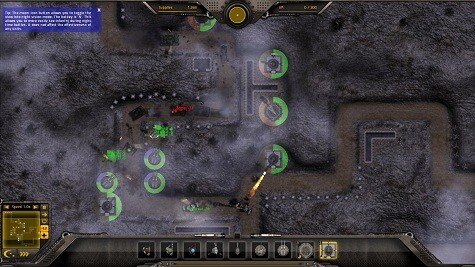 After experiencing great success with Gratuitous Space Battles, Positech Games switches the battleground to Terra Firma. The result is a game that feels like a hybrid of it’s spiritual progenitor GSB, and a real-time tower defense strategy, though players can also opt to play the role of the attacking force. Units and upgrades can be unlocked by clearing stages, and the number of possible configurations is virtually limitless. While there certainly is a lot of depth to be found, Gratuitous Tank Battles almost seems to delight in putting players into shallow graves.

I’d like to state this before storming into the fray: Though I’ve had some limited success while playing Tower Defense-type games, I generally get trounced when I attempt to change the difficulty to anything higher than medium.

Even the lowest difficulty settings on GTB had my head spinning. The real-time battles and adaptive enemy AI resulted in most of my battles ending not long after they started. Could this be due to my level of skill? It’s quite possible. And yet, after numerous failed attempts, it started to feel less like my shortcomings as a less-than-hardcore RTS gamer, and more as though GTB is geared more towards a specialized class of player. If the defender role is proving too vexing, try switching to assault. I still hit walls, but I felt more in control of the action.

The first campaign stages are a barrage of information appearing as text boxes. While it does bring attention to the many facets of gameplay, the frequency of breaks in pacing can be overwhelming and slightly off-putting.

The action surrounds a fictional World War scenario where the Allies are still warring with Germany decades later. On the assault side, tanks and infantry are accompanied by enormous mechs guarded by energy barriers, while giant mechanized laser turrets of various types are unleashed to defend against this new mechanized force.

Each stage in a campaign will present the player with the choice to attack or defend to clear the round. Assault involves laying out a decent balance of troops in the hope that enough will reach the checkpoint before a finite level of resources is depleted.

Likewise, choosing to defend will require setting up fortifications to defeat the throngs of units before too many can pass the point of no return. The enemy AI will react to the type of units placed by the player, and thus, keeping close stock on what is placed is crucial; it may be necessary to deconstruct units that are less useful to make way for better suited units.

Those Who Do Not Pack the Gear

After passing the introductory two levels in the campaign mode, it becomes almost impossible to complete a stage using the default units. Initially, certain units have inherent strengths and attributes. For example, some units are better suited to face infantry, while others are proficient at piercing energy shields. For each advantage, a unit has a counter unit against which it will not fare well. Upgrades can help to boost these traits, or balance a unit by adding additional weapon, defense or performance bonuses.

Any added upgrades will also increase the cost of the unit.The right balance between assault, defense and cost and must be struck, lest the player run out of resources faster than the enemy does. Fortunately, there are numerous possible combinations with more becoming available as levels are played through. Bring the improved units into battle for a bout of trial by fire.

Blimey! Don’t Get Your Knickers in a Nickel Widget!

The default camera view provides a birds-eye over all the action, though it is possible to zoom in to view individual skirmishes up-close. This will display greater detail in both visuals and sound effects, but it also makes for a less-than ideal way to view the total battle. Given the fast and furious real-time nature of the battles, players won’t likely have a great deal of time to stop and smell the roses.

Suppose They Gave a War and Nobody Came

As in Gratuitous Space Battles, the online functionality only allows a player to upload scenarios to the community, or download them from other players. There is no actual real-time PVP, though the layout of the game practically begs for it.

There is a considerable map editor included. If the included challenges prove too easy, why not take on a player-created spiral of doom?

At the end of the day, Gratuitous Tank Battles will likely divide players into two distinct camps. Players who get their kicks tweaking dials and gently nudging sliders in the delicate pursuit of armchair military perfection will likely find themselves in a veritable modder paradise. Casual players, on the other hand, may do little more than peek out of the foxhole before waving the white flag, especially when considering the 20 dollar price of admission. 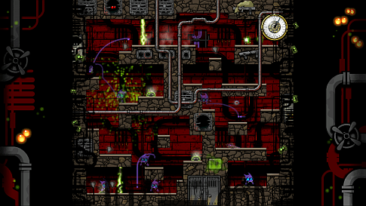 The Adventures of Shuggy – An Indie Game Review 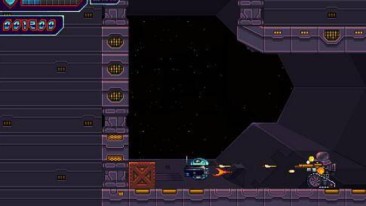