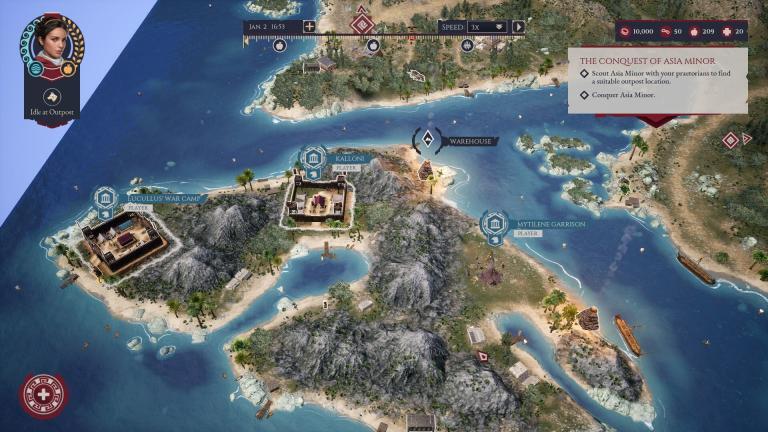 Expeditions: Rome is a tactical RPG that fuses its historical setting with a deep, nonlinear narrative, strategic planning, turn-based combat, and party management. Set during the later years of the Roman Republic, Expeditions: Rome offers a broad, cross-genre effort to provide an engaging story coupled with multi-faceted challenges worthy of any budding tactician.

Rome if You Want To

Expeditions: Rome allows for complete customization of the main character and also features some wonderful portrait art to give more personality to the protagonist. I do wish the creation options were a little more flexible to allow for matching the avatar to the portrait, but in fairness, the character model is usually seen from quite far away. I found the portraits helpful in developing an idea of the characters and decided my protagonist was a toughened, pragmatic woman seeking a chance to build a military career. 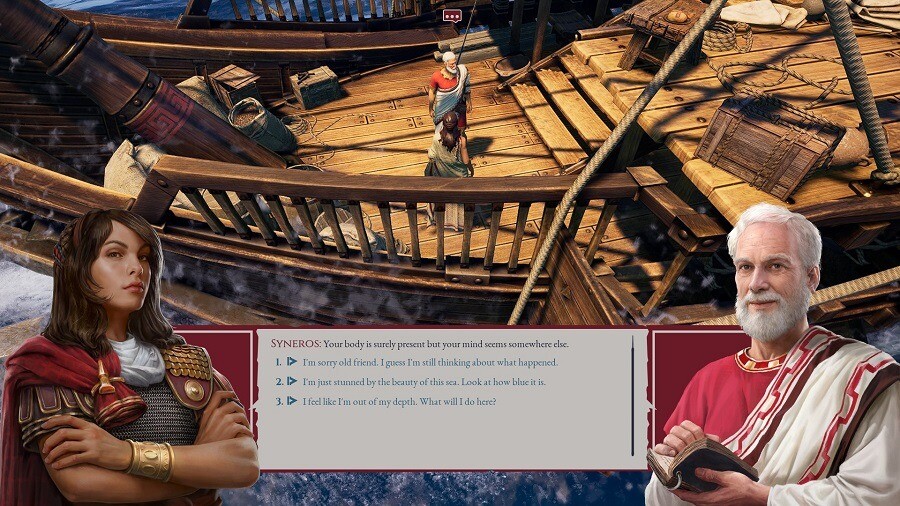 Regardless of the choices you make, you’ll be playing the child of a murdered official seeking escape from the threat of political enemies. This journey leads to a campaign to suppress Greek rebels, and from there the story winds all across the Roman territories. Expeditions: Rome provides numerous chances to make key decisions that shape the direction of the story, and these decisions also influence the disposition of your party. If they become dissatisfied, this can seriously affect morale in battles.

Rome around the World

Navigation is handled on two maps: a strategic, large-scale overview of the current campaign where long journeys and legion management are presented and a small-scale tactical map for the majority of the story and combat. Speaking of combat, it follows the tradition of turn-based tactical action that should be familiar to XCOM fans. Each character has an action point and limited movement along with an assortment of abilities to choose from. 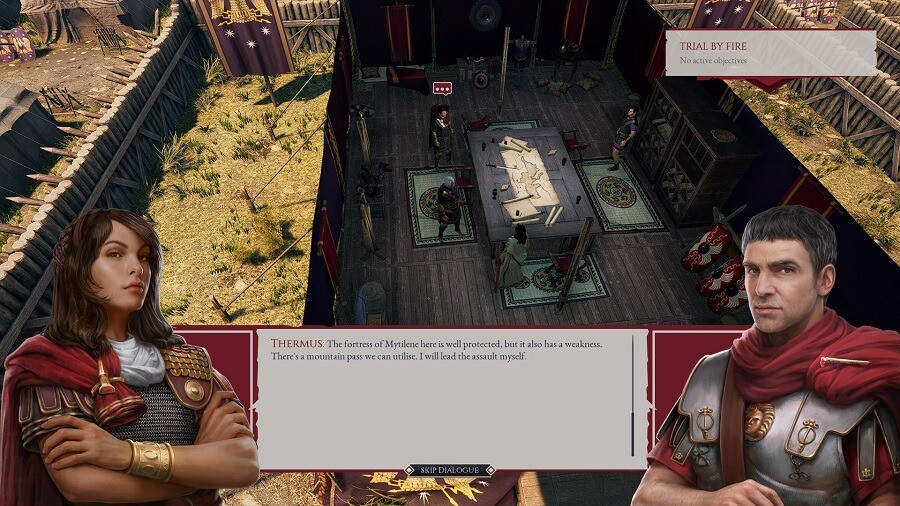 Four classes are available, and you can choose which class the protagonist takes up near the beginning of the story. While dressed in Roman military vernacular, the classes essentially boil down to tank, rogue, ranged, and support. I chose to make my character an archer of the sniper subclass, and I had a great time marking enemies from afar and taking them out with combined arrow fire from additional archers in my party. The four classes all work excellently together, but Expeditions: Rome has ample flexibility for tweaking your party and cultivating a unique approach to battles.

Expeditions: Rome provides some fun twists to turn-based tactics that help to set it apart. One of my favorite features is that weaker enemy units, such as militia, if killed, refund the action point used to slay them. This can help to promote chains of kills that drastically loosen up the sometimes rigid feeling of turn-based tactics games and offers a really satisfying experience as you work your way through a surprising number of targets in a single round. 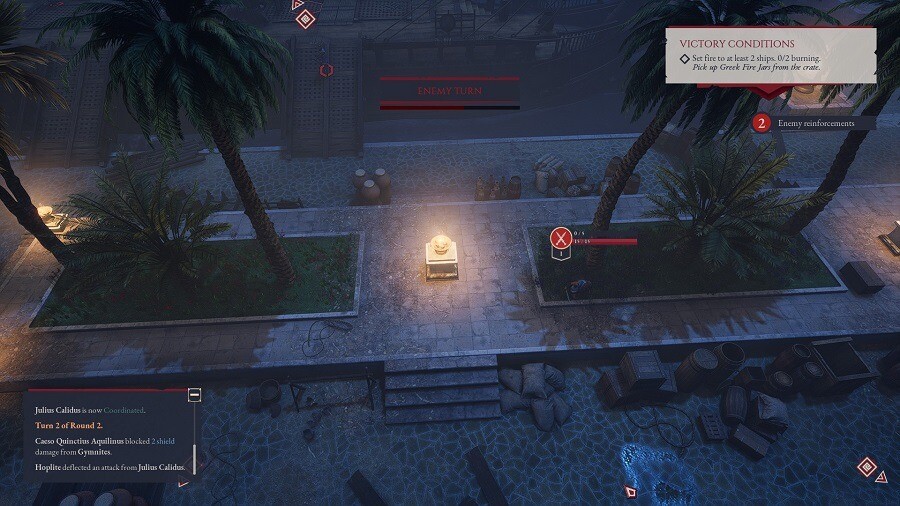 The missions of Expeditions: Rome are well crafted and provide excellent material for emergent storytelling. In one early mission, I made a small but significant mistake early on that shaped the entire combat. The task involved burning two ships docked at a port. These ships each had a hex at their center which needed to be burning for the ship to count for mission parameters. I noticed this too late and had my designated fire starter (a roguish gladiator) set fire to the front of the ship. By the time I realized this wasn’t adequate the rest of my party were fully engaged in fending off the enemy forces and the gladiator was halfway to the next boat.

From the Frying Pan into the Fire

I decided it wasn’t worth tasking any of my engaged warriors with grabbing incendiaries from the crate (now a fair distance from the fight) and that I should just wait for the fire to spread to the necessary hex. The gladiator made it to the second boat and set it alight just as my stalwart team began to strain under the relentless assault of the enemy. I had the team retreat to more defensible ground and hold the line, but this created a new problem: the enemy would soon be blocking the way out for my gladiator, now making his way back from the second ship.

He had two choices: fight through the increasing number of defenders or make a dash across the first boat, now half on fire. I chose the latter, and he only just slipped through, catching alight in the process. I had my support character heal him up, and we held our ground long enough for the fire to consume the ship, causing the enemy to give up their fruitless counter-attack. It was an immensely satisfying battle that felt cinematic not only in the visuals but in the story it produced. 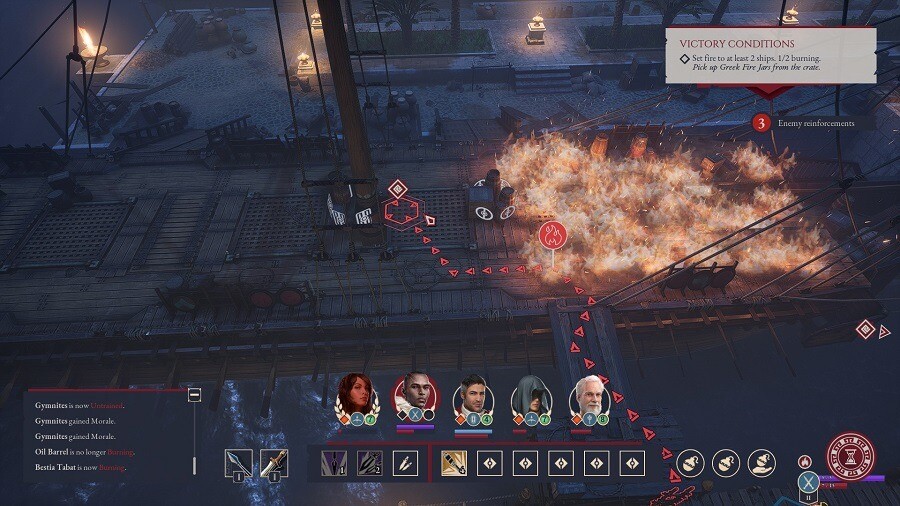 Speaking of visuals, Expeditions: Rome is stunning to behold. Great effort has gone into grounding the game in the setting and everything looks superb. One small exception to this is hair; I noticed that my character’s hair had a somewhat rubbery look to it on her avatar. A minor quibble, but notable when everything else looks so good.

The music is also solid, supporting the aesthetic nicely. I’d also like to mention the voice acting: Expeditions: Rome is fully voiced throughout, and it helps to make the characters so much more likable.

Expeditions: Rome is a truly excellent tactical RPG that feels like a work of passion. The story is engaging from the outset, the setting fully embraced, and the combat sublime. The action manages to keep up a solid pace thanks to clever design choices and the character options are excellent. I heartily recommend Expeditions: Rome for anyone with even a passing interest in tactical RPGs or the era of the Roman Republic.

Expeditions: Rome is available via Steam.

Check out the official trailer for Expeditions: Rome below: 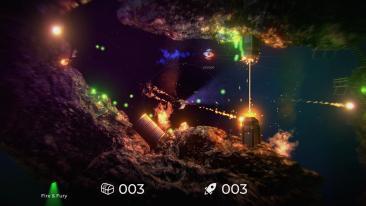