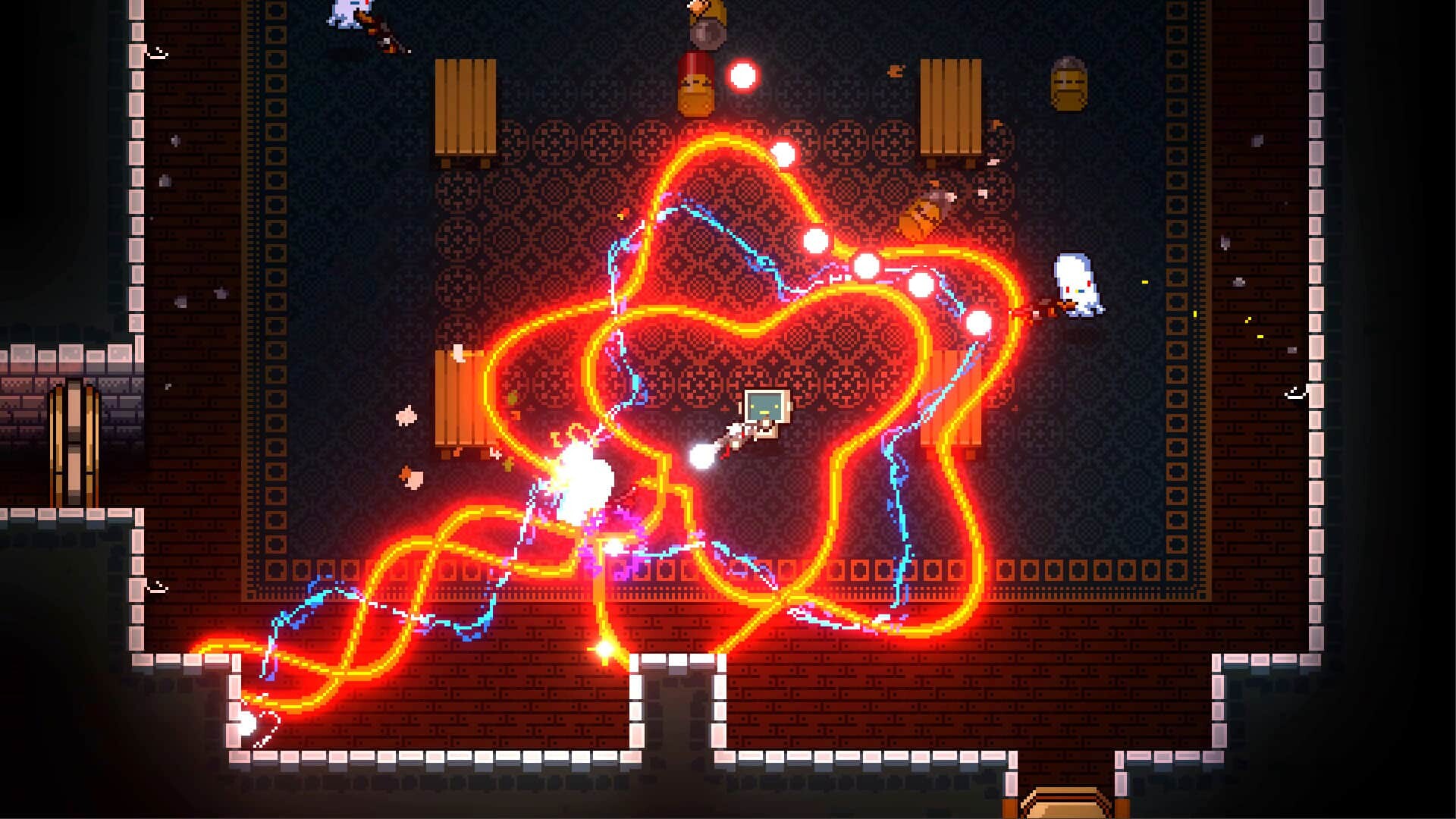 Around an encampment in the Breach, an unlikely group of strangers stare into the darkening abyss. In the distance is the entrance to the Gungeon. Countless warriors have attempted to reach its deepest recesses, and failed. But the prize that awaits the gunslinger who triumphs is worth the risk: The Gun That Can Kill the Past.

Should any of them survive an ever-changing dungeon and survive the onslaught of the Cult of the Gundead, the past may finally be eradicated. The Past Never Lets Go

Enter the Gungeon is an exhilarating mashup of genres; it’s a procedurally generated bullet hell dungeon crawler, so to simply say it keeps you on your toes is a gross understatement. A massive selection of weapons are available to be uncovered, with dozens more to be unlocked as the game progresses. The game also pays homage to a staggering amount of action and sci-fi properties, memes and tropes, all of which enhance the overall experience.

Once More, Into the Breach

Think of the Breach as home base: the only safe haven any of the combatants will know, as they are forever linked to it, even if they die in the Gungeon. Though sparsely populated at first, other denizens who are being held captive below can be released should they be encountered on a run. Once freed, they can either be found randomly within the Gungeon or in the Breach, and can sell unlocks to additional weapons, items and playthrough options.

Initially, there are four hardened characters to select from, with a fifth available for co-op runs. The Space Marine starts with a helmet (providing an additional shield unit over the standard three hearts all characters begin with). The Criminal carries a mysterious photograph with her; upon being struck by enemy fire, she looks at it, granting her a temporary boost to her damage output. The Pilot isn’t the clearest shot, but he is able to carry two support items. The Hunter starts with a gun and a crossbow, and also has a dog companion who can occasionally unearth bonuses in a completed stage. The Cultist, who is only available as a co-op player, starts with a dart gun and a friendship cookie. 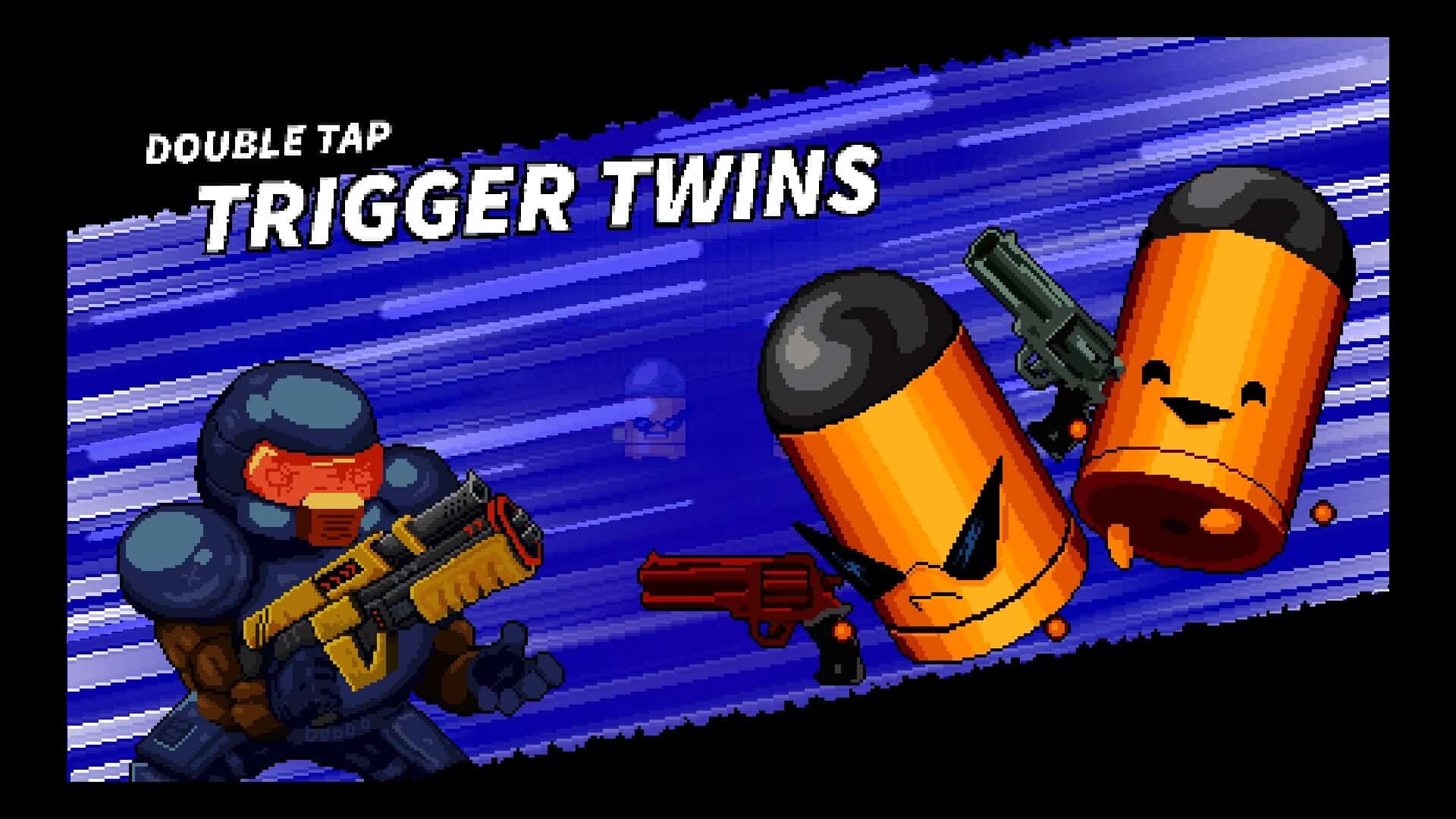 Each descent starts with a newly configured stage to explore, with an unknown roll-out of enemies to encounter. Once a room is entered, the exits slam shut, and won’t open until all foes are eliminated. There are two treasure chests to be found on each floor, a shop from which helpful items and weapons can be purchased, and a boss enemy. There will occasionally be some variations to this formula.

With the ever-changing level structure ensuring that no two layouts are the same, players must seek out the behavioral patterns of the various Gundead enemies. Even still, some rooms are packed with a variety of foes, providing a challenge for even seasoned players. The deeper you venture, the fewer the spaces between enemy projectiles. Pillars are your friend! When in doubt, take cover.

No cover to be found? Toss up a blank. This blows back enemies, and will clear all projectiles in a room for a brief moment. Use this temporary respite to get clear of harm’s way. If you’re out of blanks, or you prefer to save them for the bullet-heavy boss battles, a well-timed dodge roll can vault you over the spray of enemy fire.

Some chambers contain tables which can be leaped over, or flipped for cover. Others contain switches that can drop chandeliers or rain piles of rubble down on foes. Watch for barrels that contain poisons and explosives! Used carefully, they can decimate foes, but they can just as easily chip away at your life points should an enemy strike them first while you’re standing too close. 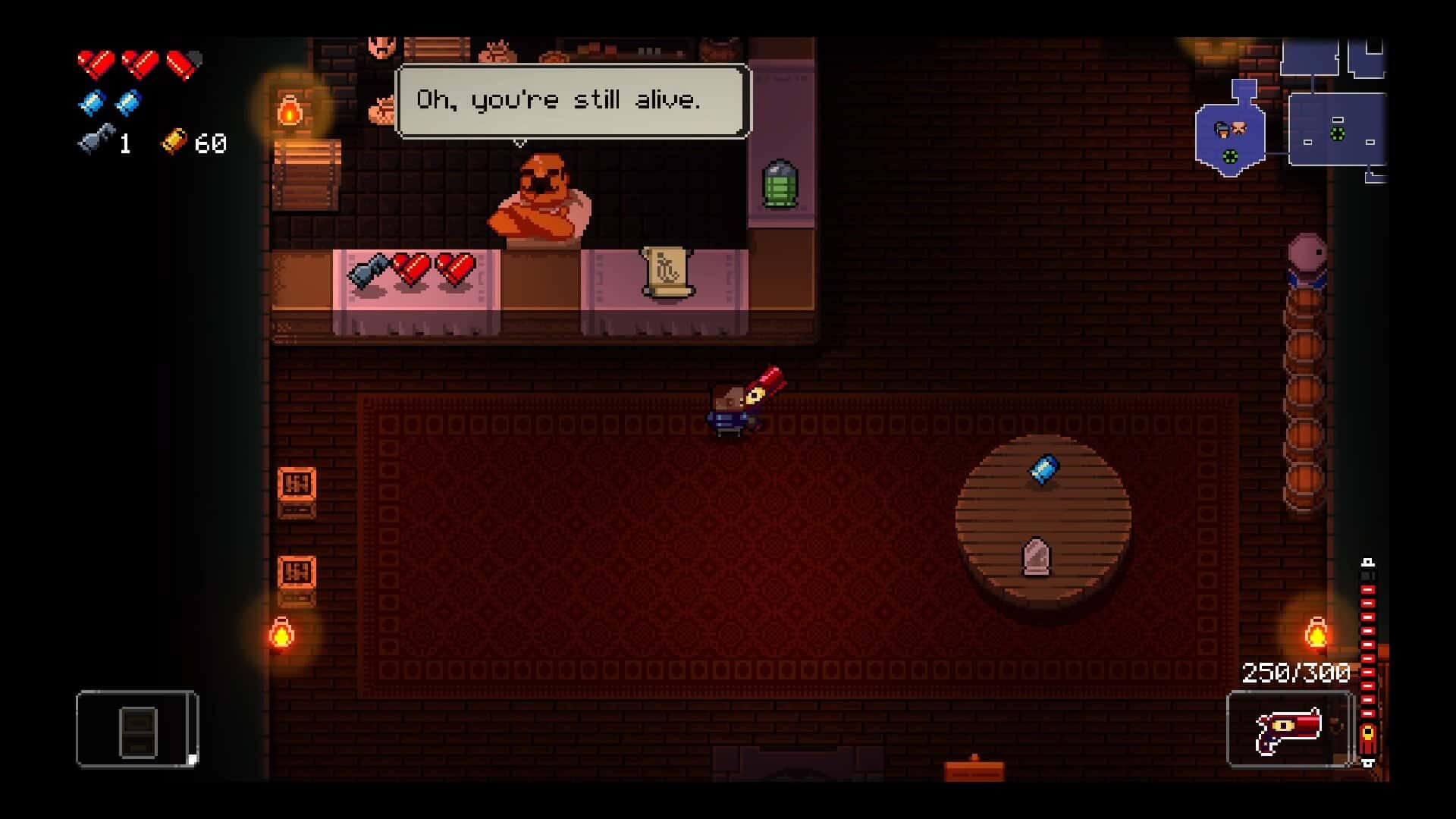 Boss battles are a double-edged sword flung right at your head. Each floor has a variety of Big Bads that might be in your way, with the faint chance of a rare boss taking their place. Defeating a boss will net you Hegemony Credits (the currency spent in the Breach), and downing one without getting hit will add an additional heart to your overall hit points.

Though the action is intense, the overall theme of the game never takes itself too seriously. With so many loving nods to sci-fi memes and action hero tropes, there are some genuine laugh-out-loud moments to be had as the lore is presented. All of the weapons, items, enemies and bosses are named with some variation of a gun in mind, and all can be traced back to a pop-culture property.

While the collection of random weapons and items may seem completely arbitrary, occasionally, collecting one will result in an arrow icon appearing about the gunslinger. This is a synergy, and these combination can change some of the more mundane items into an incredibly useful asset.

As an example: while having the Badge will result in having a Detective Murtagh-esque partner to fight along side you, finding the Full Metal Jacket in the same run will cause him to become an invincible Robocop-like ally. This is just one example, but check out the official wiki for the game: there are literally hundreds of synergies available.

It took me WEEKS of playing before I finally reached the High Dragun, and another week after that to defeat him. The Gun That Can Kill the Past was mine! Big deal! It’s worth nothing without the Bullet That Can Kill the Past! Constructing the fabled projectile will require assembling the necessary pieces over several lifetimes.

And even then, the past must be faced to be defeated.

AND there is a past for each of the starting characters.

AND (!!) there are bonus playable characters that can’t be unlocked until one character has killed his or her past! These characters also have pasts that they want to kill!

Consider yourself a completionist? Strap in, bucko. The Gungeon won’t release you until you take yourself from its cold, dead hand.

One Shell of a Good Time

Enter The Gungeon is a wickedly difficult experience that will keep you coming back for more. While the Gungeon Gods may provide a more favorable weapon and item layout in one run than in others, even the less fortunate treks can be made satisfying by threading the needle through barrages of bullets, Matrix-style. The Farewell to Arms and Advanced Gungeons and Draguns updates add additional layers of challenge and reward. No two play-throughs are ever alike, and each one is more than enough to demand another. 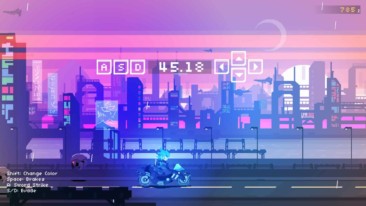 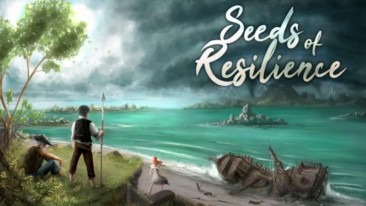