So Indie You: Developer Profiles

The indie gaming scene is here and growing like a CA brush fire, but it wouldn’t be what it is today without the dedication of programmers, designers and companies willing to release quality titles without the backing of major publishers. Here at IndieGameReviewer, we want to know what makes ‘em tick.

We had a chance to interview Andrew Roberts, CEO of Cosmic Logic, a new and talented team who are already making a name for themselves in the indie gaming community.

IndieGameReviewer: Andrew, can you tell us how Cosmic Logic came into being?

Andrew Roberts: Cosmic Logic officially became incorporated in April of 2008, however, was in conception for over 4 years before that point. In 2004, while still in college studying business, I had the idea that someone should start a video game company that was rooted in the 80’s. I thought it would be unique for a company to start making games as if it were 1983, and simply make a game as if it were to be launched on NES or Atari 2600. From that, the company would take that same game, and do a 16 bit sequel, followed by a 3D sequel, etc. The main point however, was to start small with a game that could be realistically put on the market with minimal development time, while at the same time building brand recognition by designing strong characters and planning sequels.

In 2004 though, the only market for these types of games was handhelds, and the last thing I wanted to do was deal with a publisher. I decided that if I were to start a game company, I would only do it if I had 100% full creative control. Games should be approached as an art form, not as a business simply making a product.

After graduating, I found it difficult to use my degree, and decided that I wanted to go down the entrepreneur route. My ultimate motivation was simply to create opportunities for others and inspire passion, and I struggled for years on why type of business to start. After doing months of research on indie game companies (while they fail, where they go wrong), and exploring the incredible opportunities available through digital distribution (Xbox Live, PSN), I incorporated Cosmic Logic and wrote a business plan.

After being denied by every possible avenue for start-up capital, I approached the community to see if anyone would be willing to volunteer (for future revenue). As of now, we have over 42 people who have made voluntary contributions, with over 13 games in development. We continue to grow on a weekly basis, and our presence in the indie gaming industry will be huge in a few years from now.

I recently realized I have 2 different business models, and I am in the process of splitting Cosmic Logic into 2 different companies. Cosmic Logic will remain what it originally was: passionate individuals collaborating on games we love. We will never release mediocre games, we value and encourage creative input, we will own the rights to all of our games, and we will build a “Cosmic Universe”, in which every games is intertwined (in terms of plot).

The other company (currently unnamed) will be set up as a not-for-profit organization. It is simply a network that helps indie developers with their games. We help developers find an artist, programmers, musician, we help with the legal (so developers can own the rights to their IP), we help with marketing, we help make industry connections, and we only take 1% of each games revenue. As a not-for-profit organization, any revenue generated will be reinvested back into the company.

Furthemore, we are working towards setting up “Cosmic Academy” in Kelowna, which will be a school or boot camp for indie development. You’ll learn how to program games, as well as game design. The point is to encourage and inspire the youth, and help get them started in the video game industry.

IGR: One of your upcoming titles is Cosmic Lacrosse. Can you tell us about it?

AR: Sure! As with most of our first round of games, the objective is to put out a fun and hardcore game while minimizing the development cycle. We originally wanted to do a 3 on 3 hockey game, as it seemed like a nice simple game to focus on, using minimal artwork, and still allowing for layers of depth. Cosmic Lacrosse is a class-based 2D sports game, similar to “Ice Hockey” for NES. With an emphasis on arcade over simulation, players are able to switch between 3 different types of players, with each type having certain advantages and disadvantages. Gamers are able to swap out their player types on the fly, which introduces a strategy element to the genre. Additionally, each player type has their own unique special move.

The game will have a tournament mode, as well as local multiplayer.

IGR: Can you tell us about some of the other titles you have in the pipe?

“Doc Logic” is another one of our games that is in the later stages of development. It is best described as a 2D survival platformer. Anyone familiar with Mercenaries Mode from Resident Evil 4 and 5 will be familiar with the structure. The goal of “Doc Logic” is to simply stay alive, with the main threat being time. As you collect time bonuses, the enemies appear in higher numbers and increased difficulty, while the level itself becomes larger. Upgrades are available, which increases the players’ agility and attack power.
“Doc Logic 2” is also in the early stages of development, and it will be in the “metroidvania” genre of games. In terms of plot, we are already beyond Doc Logic 3…

We also have:
• Cosmic Assault – a top down shooter/brick-breaker game
• Cosmic Harvest – competitive item collecting game, similar to “Trog” for NES
• Cosmic Courier – a game of navigation through a small town
• Spinnaker – an arcade sailing game
Furthermore, we are helping about 6 other local programmers with their games.

IGR: How did you find working with the XNA framework? Any pitfalls?

AR: I’m personally not a programmer, so I asked some of our programmers about this question. Here’s what Tyler Reid (Cosmic Lacrosse programmer) had to say about Torque X:

“I can definitely say that Torque X 2D has been an awesome engine to work with, despite never really using XNA before.

The most handy aspects in a nutshell are the tools you get to use, the drag and drop level builder that lets you easily build levels, place animations, scrollers and tile objects in an easy environment and the GUI system, used for menus, HUDs and general in game GUI objects.  While the GUI system isn’t that user friendly at first it really comes together the more you play with it.

The physics engine, while not perfect by any means is also awesome to have.  It beats the hell out of having to purchase any other middleware, or making one up.

As for any cons?  There aren’t many to speak of that I’ve run in to.  Granted, I haven’t used XNA to tell the difference either.  A hurdle I’m working with right now is making some of the XNA features, namely the gamer services, mesh with Torque X.  XNA offers a great set of tools that are built in to the X-Box: a ready-to-use keyboard, message dialogs and storage selection, to name a few.  Granted this isn’t much of a hurdle, I’m just new to the lanugage and it’s just something I have to learn.”

AR: We actually are going through the application process to have our games on Xbox Live Arcade, however (from my understanding) they have recently decreased the number of game “slots” available for indie developers on XBLA. However, once launched on Xbox Live, we will explore other platforms, such as PSN, WiiWare, Steam, and possibly iPhone.

Thanks for your time Andrew!  We at IGR wish the best of luck to you and your team with the upcoming titles.  To learn more about Cosmic Logic, visit their website at http://www.cosmiclogic.ca 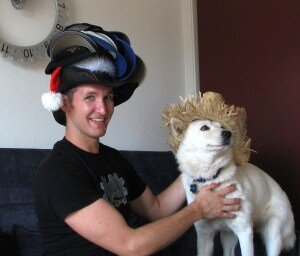