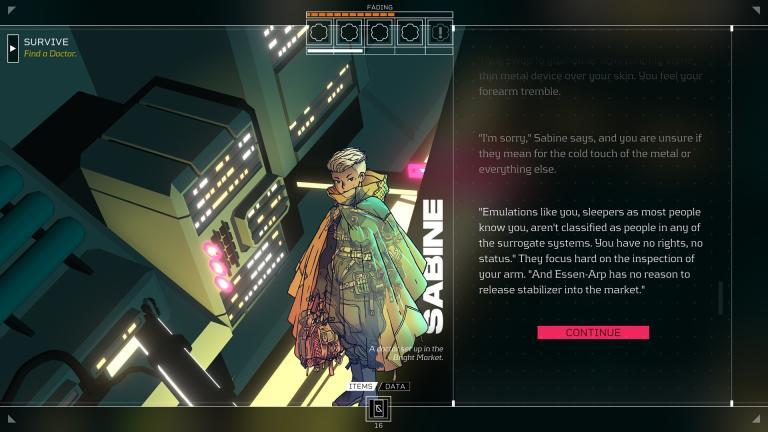 Developer: Jump Over The Age

Citizen Sleeper by Jump over the Edge

I don’t what it is exactly – besides the great character development, world-building, music, and interactive storytelling – but I can never quite get NeoCab off my mind. Some people hate the cut-out art style or the seemingly lugubrious pace of the plot development, but I can’t stop thinking about it.

They say good game design keeps things fairly simple and reliable: building upon familiar established cues but introducing something new. Not all the things, just something. NeoCab does just that; the mood graph is a wonderful way to examine how your heroine is lining up with the world around her, and the fact that they can see it too can cause all sorts of interesting consequences and reactions.

From the creator of In Other Waters comes science-fiction dreamchild Citizen Sleeper, which takes a similar approach, with just enough differentiation to spark curiosity and novelty but not so much as to require a steep learning curve.

In full disclosure, I am an impatient being. My days of extended play sessions without a care in the world, roaming the dunes of Silithus to camp giant bugs for a purple binding power ring, are behind me. I have zero time for drawn-out JRPG backstories that have me numbingly mashing my LMB or Enter key as a rosary prayer for a skippable opening.

So you’d think something like Citizen Sleeper, which is very text-heavy, might not be my bag. But its superb clean design, perfect score, multi-layered story arcs, faction/resource/time management, tidy UI, and twists and turns dragged me quickly into hours of play. Those hours then became all-consuming, playing straight through the night. But let’s back up a little… 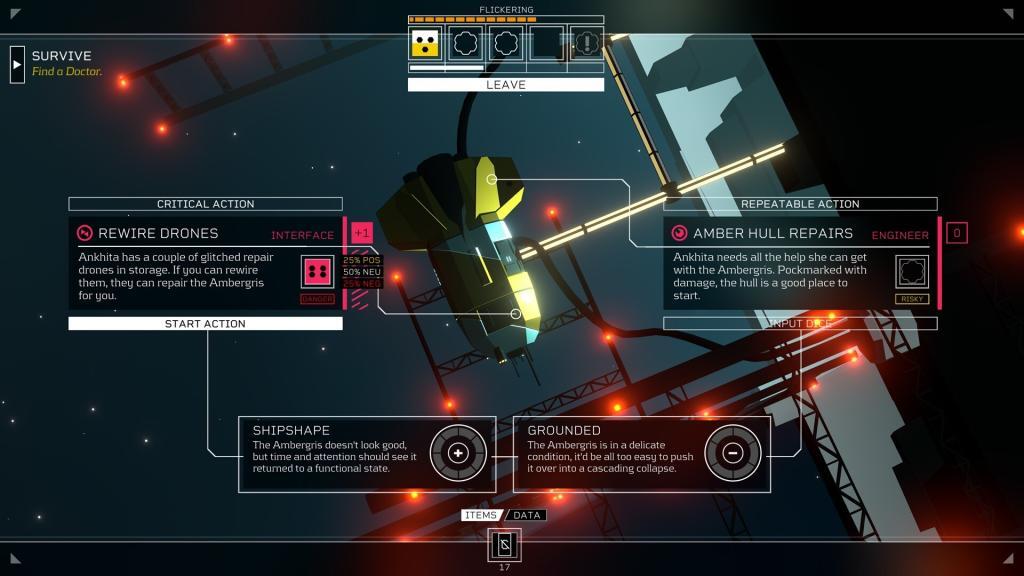 I knew I was in for it when I saw that it was a dice game, not a card game. I love FATE and FUDGE dice – just enough to whisper outcomes in one direction or another without ever hamfistedly obliterating your delicate work. The game promotes the fact that it was inspired by the narrative freedom of a tabletop RPG. The dice ensure that the branching options are continuously mitigated by the shifting options of the RNG – and ingeniously use the lower values for a ghost world cyberspace and higher values for faction and quest-driven tasks in meatspace.

Not being sufficiently nourished or repaired also means you will generate fewer dice for your next cycle, so you are managing those vitals with your limited dice each round as well.

I knew I was done for – in a good way – when the tutorial kept popping up with more concepts to navigate. Multiple overlapping realities. “Is this going to be too ambitious and fiddly?” I wondered. “Am I going to get exhausted by an abundance of mechanics?”

But I never did. It was a need-to-know basis, both structurally and narratively.

Design elements aside, the writing is fantastic. I mean like really thoughtful, poetic, emotive, succinct – good prose, good characters, good dialogue – modern and conscientious but never preachy or twee. Complex characters, complex ethics, interesting progressions. Loyalties shift and mutate like the reality you inhabit: a kaleidoscope of cognition and consensus. 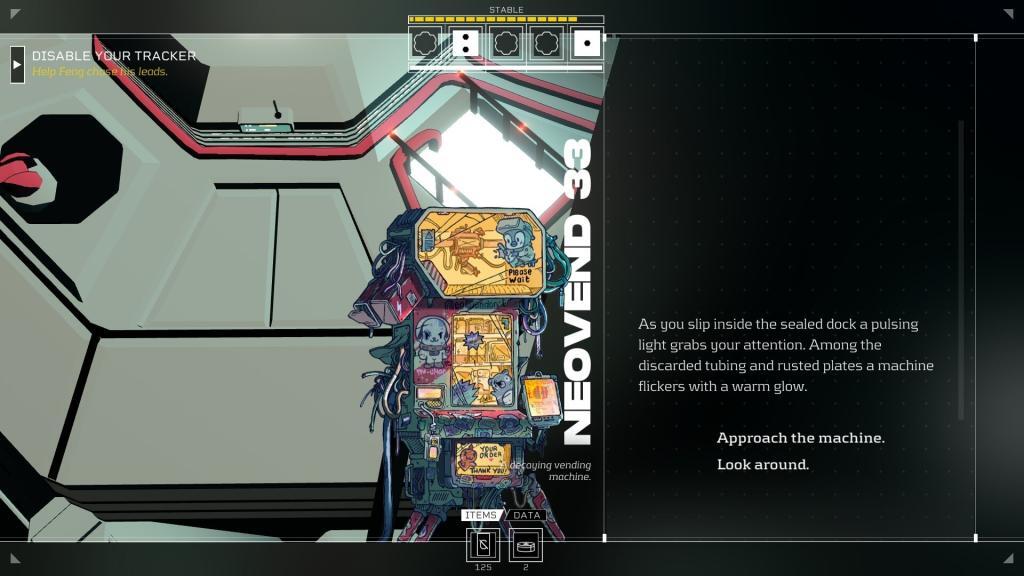 The titular character that you play is fascinating. A mix of melancholy, dread, wonder, innocence, virtue, and sometimes shadiness to learn, survive and thrive. It is a fascinating (literally) construct of not only emotional layers but play modalities. Choices do matter and the meta-level of your makeup creates some inspired ideas.

Also I must mention Amos Roddy’s insanely cool, pensive, minimalist electro soundtrack. No word of a lie, I would leave the game on to fall asleep to and the music never got old. I would turn up the volume on my Steam Deck because it completed the immersion for me. Enjoy it for yourself:

Wake Up, Sleeper, Time to Grind

OK, now some minor quibbles: the dragging-and-dropping of things onto things can be a bit hit-and-miss. It doesn’t get any better trying to do it on Steam Deck’s touchscreen where I completed the final 30% of the game.

Sometimes the data-mining stuff is a little too simplified and repetitive, such that it can veer on grindy.

Sometimes progression can be done too easily: a repeatable action that allows me to build faction can be done as many times in a row as I want if I have the resources, but when this means gaining cred with an underground Spicer bar just by repeating the purchase of a drink, it feels meaningless. But the locations expire and update, and this refreshes the ruse.

Also, there can be a bit too much backtracking – particularly when you want to end a cycle (a day/turn) and you are advised that there is still an unfinished encounter to must complete. This may involve panning around the screen, or even moving across the map to find the shimmering node that requires your attention. I felt this could be handled better.

On the other hand, with little more than some pretty monochromatic illustrations and a page of text, despite being turn and not timer-based, the game created some palm-sweat-inducing, stomach-churning moments that had me legitimately squirming in my seat.

For someone who hasn’t seen or played it yet, I would early on describe Citizen Sleeper as Supergiant’s Transistor, Klei’s Invisible Inc. mixed with the aforementioned NeoCab. Let me throw another one in for good measure: think of it like an isometric Mass Effect meets Cultist Simulator.

OK, I’m gonna stop with the shenanigans. I hate to describe a game using other games, but maybe it is more the feeling those left me with that Citizen Sleeper summons: a seemingly perfect blend of emotional storytelling and world-building with a gorgeous aesthetic, rich but easy-to-pick-up gameplay, and a lasting experience that I can easily recommend for years to come.

Fortunately, the game has already added two new free DLCs (FLUX and REFUGE) to extend the arcs of the characters, explore the backstories of others we have only heard about, and generally further enrich the lore and life of The Eye and its many stakeholders. 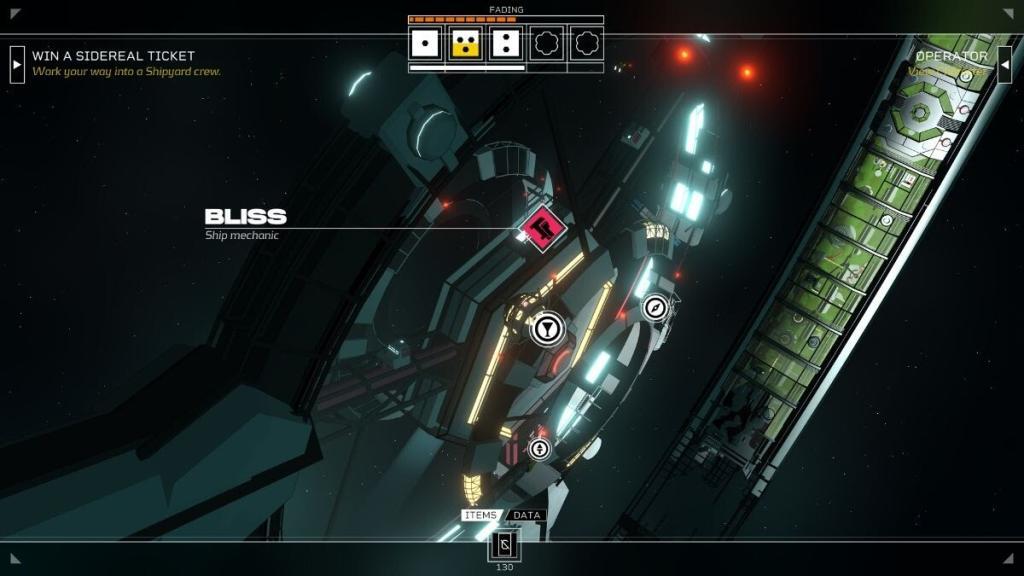 These DLCs are seamlessly implemented such that just when you feel the story winding down, a conversation extends the possibilities into new areas of the ship, new characters and new quests so naturally that you may have a tough time figuring out where the transition happened.

I found I kept choosing the paths that would extend my time on The Eye, taking the long route, savoring the culture, the stories, and the winding sidequests. A place I didn’t want to leave.

Citizen Sleeper is available via the Nintendo Store, Microsoft Store, and Steam.

Watch the trailer for Citizen Sleeper below: 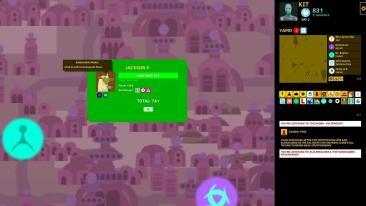