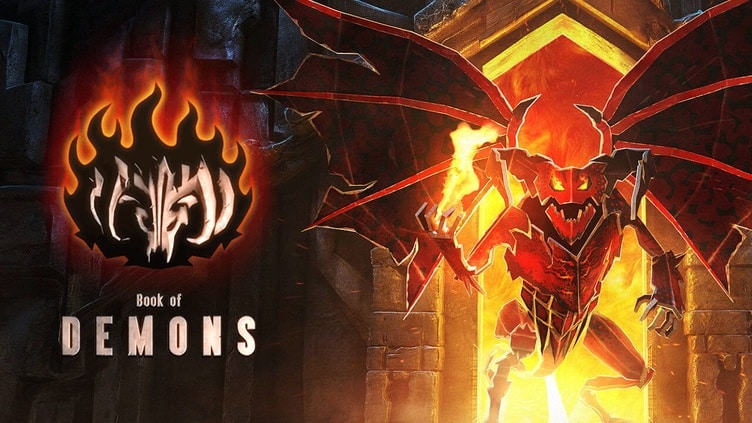 Book of Demons from Thing Trunk

Book of Demons from Thing Trunk is one of the most unique offerings to the action RPG genre this year.

What seems like a standard point-and-click dungeon crawler adds an interesting element that fits perfectly with the visual theme: deck-building.

Book of Demons plays like a pop-up book come to life. The 2D main character and enemies move on a 2D-for-3D landscape, and everything looks as if it is made of paper. The visual theme clearly fits with the title of the game but also the deck-building element. 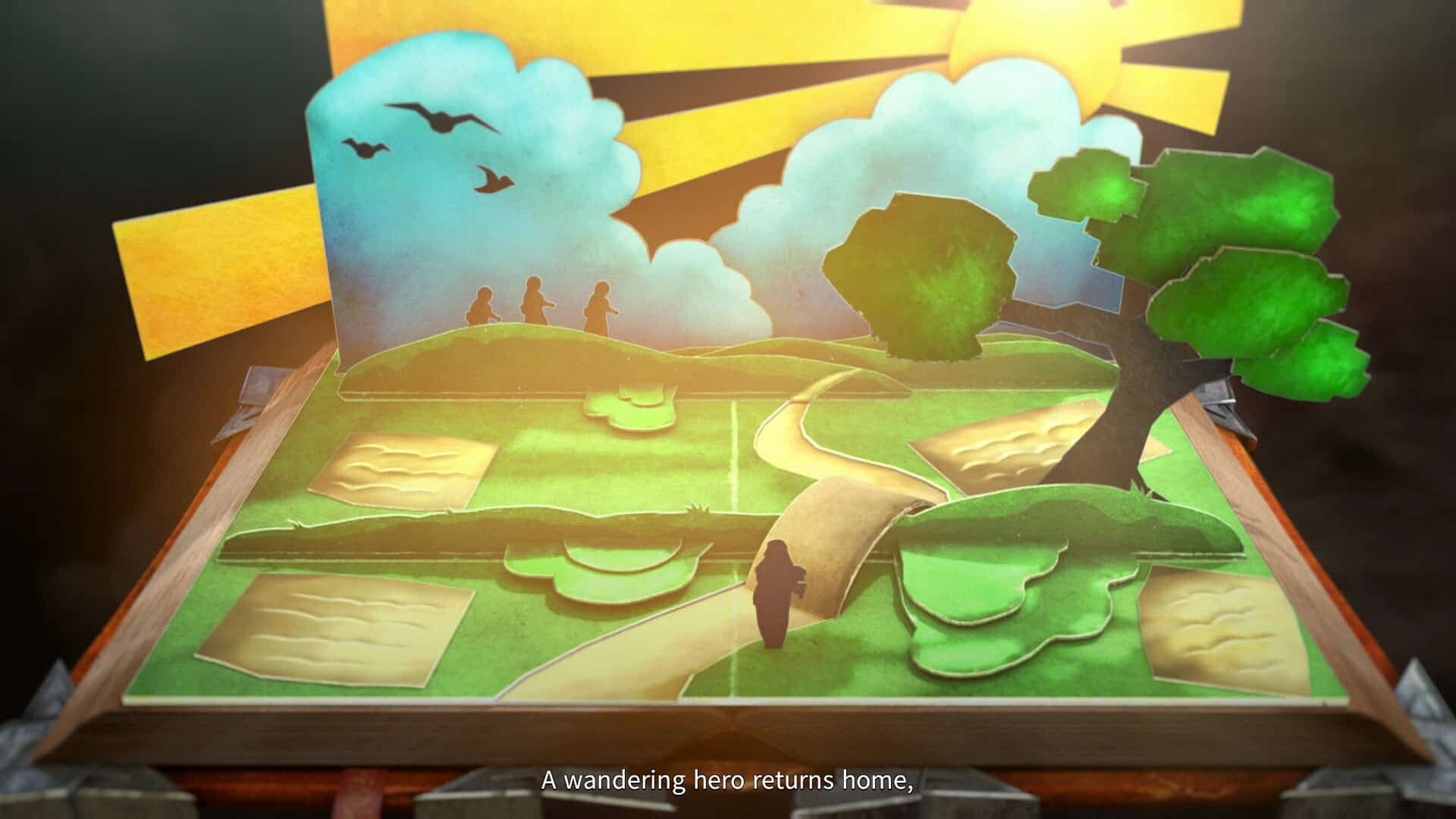 As the procedurally-generated dungeons are explored, cards can be found by salvaging bookcases or defeating bosses. Only a few cards can be equipped to your character’s deck at first. More slots for cards unlock with progression. The deck system plays almost like a character ability in an MMORPG. Each card in the deck is assigned to a number key on the keyboard. Variety makes this an interesting way to acquire abilities, as skills aren’t simply unlocked in order as the character levels up. 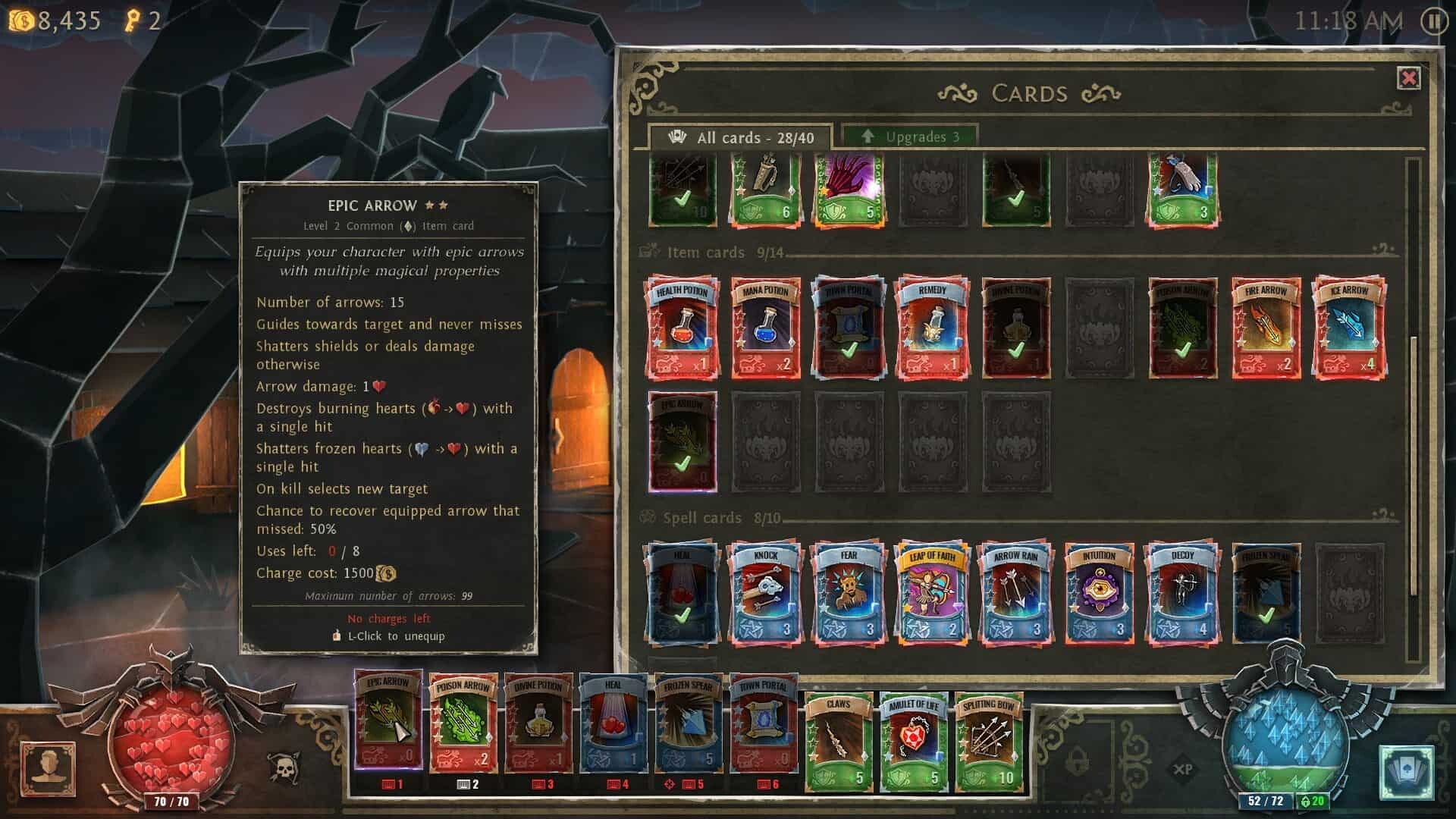 Most of Book of Demons is spent diving deeper into the dungeons on the way to hell. The rest of the time is spent in Town. The town gives a much-needed respite from the barrage of enemies. A few fully-voiced characters can be interacted with, entertaining the hero with some gossip or providing a service. The town is where decks are built, cards are upgraded and characters are developed. Only the Warrior character class is available at first. Shortly after some leveling up, a Rogue and a Mage class are available for additional play-throughs. These characters will naturally acquire a lot of job-specific cards for the player deck. 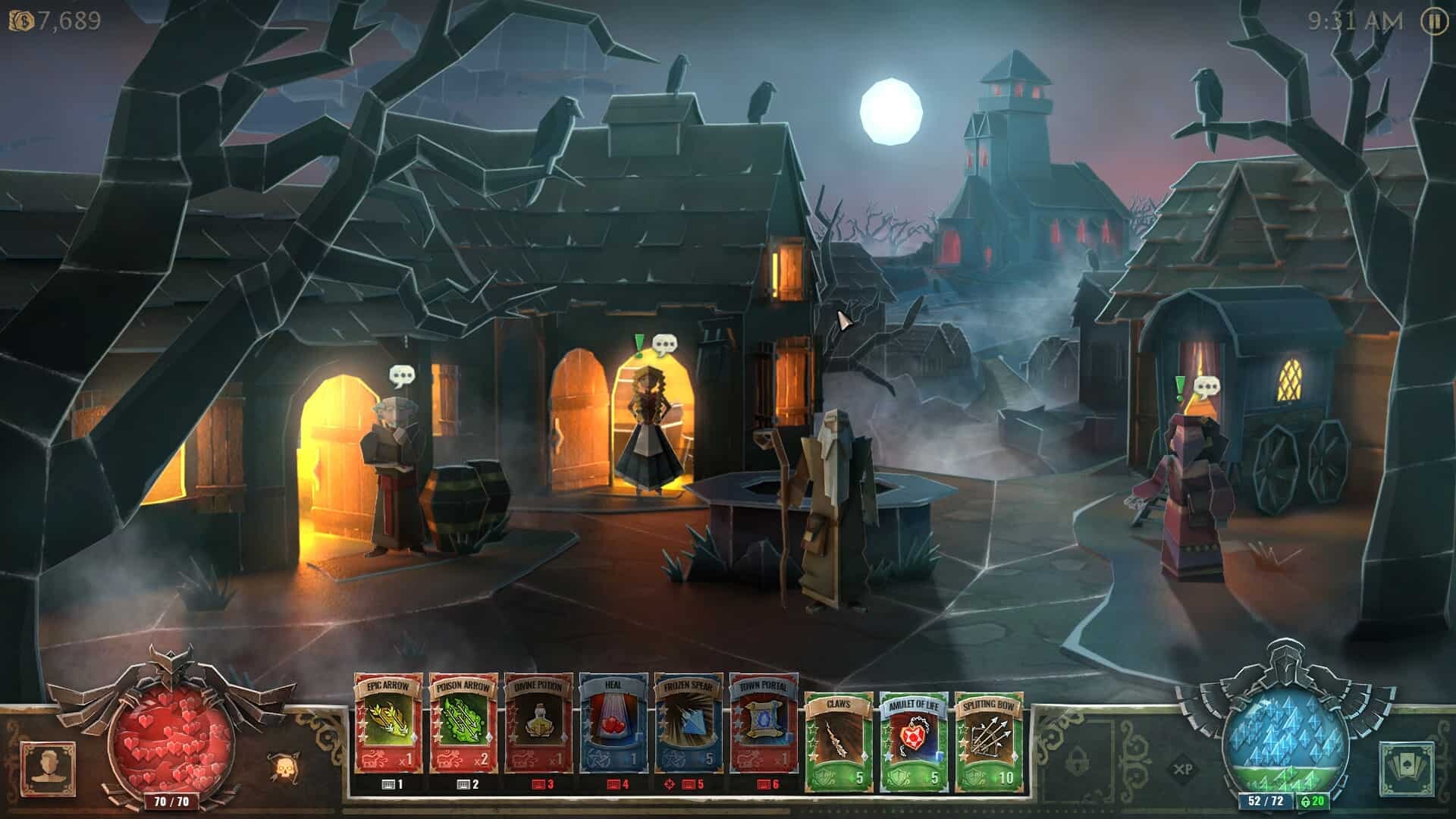 One of my favorite features about this ode to the Diablo series is that Book of Demons gives players an option for how long they want their quest to be. The so-called “Flexiscope” feature custom-tailors dungeon dives anywhere between five minutes and an hour (but the minimum time increases as you descend to harder levels). The number of items and enemies are the same, as the length just dictates which percentage of completion will be covered. This is great for bite-sized questing or marathon-questing alike. You can then stitch new micro adventures to the previous ones to pursue your path to the ultimate showdown.

Gameplay can also be easily scaled from Casual, which allows you to retrieve all of your loot from your fallen corpse, to Roguelike, where death is total and final – no erasies.

Thing Trunk have done an amazing job building the user experience here so that any style can be enjoyed, and the many facets of gameplay can be readily access by keyboard mouse or gamepad (the latter of which provides a distinctly different experience, even in UI). 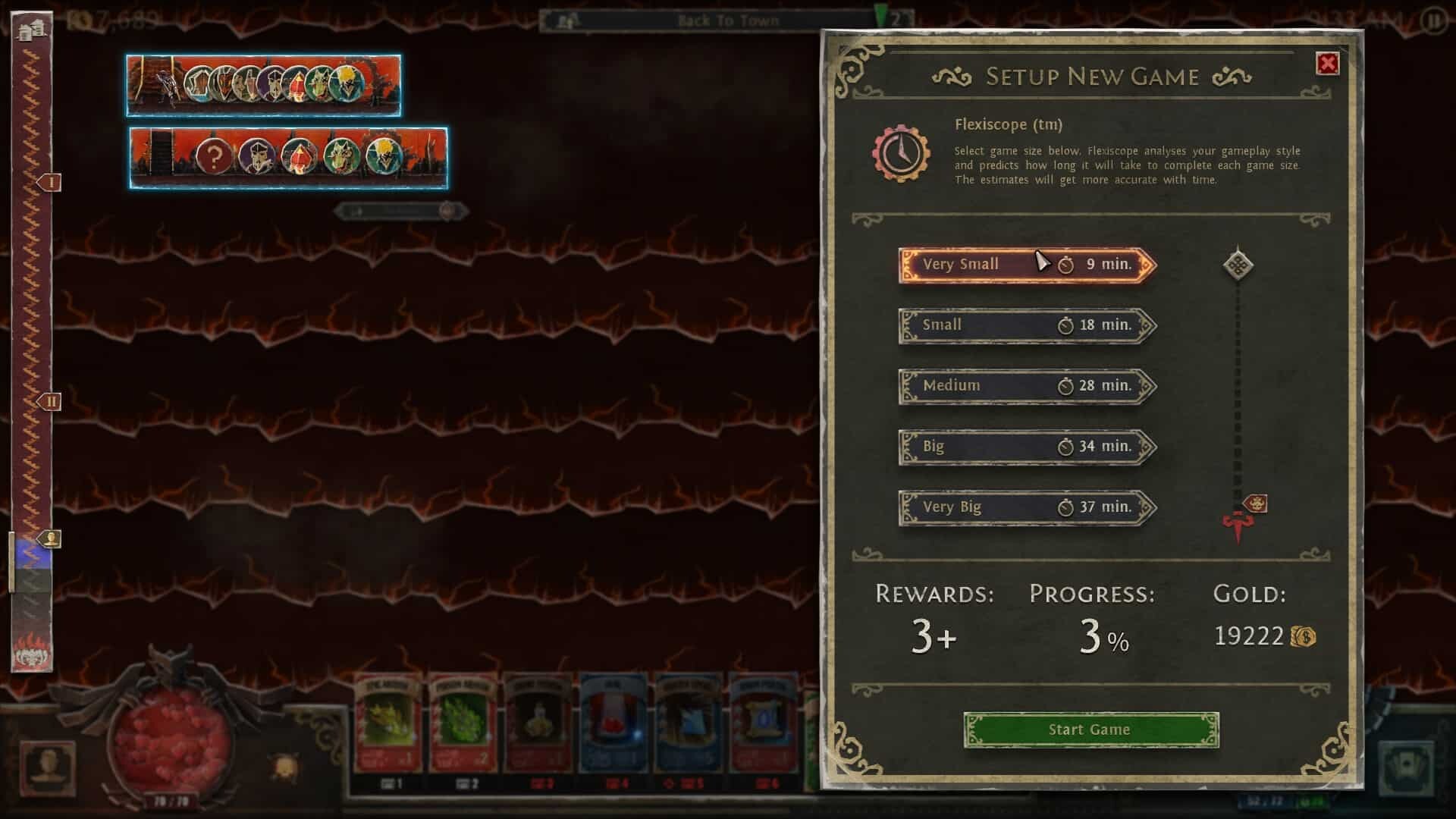 There are a ton of other fantastic features in Book of Demons that reaffirm its place as one of the best hack-and-slash hybrids of the year. With over 70 enemy types, there’s no shortage of variation. Bosses have phases of invulnerability and usually require some sort of strategy to defeat. They eventually develop elemental biases and can even start burning down your (various) mana types.

Leveling up gives the character either a health point or a magic point, but whichever isn’t chosen goes into a pot back in town to be purchased later. These points just barely scratch the surface of the deceptively simple UI that controls the complexity of this title.

A Whirling Dance of Clicks

It is as much a choreographed, mnemonic clicker as it is a real-time strategy, hack-and-slash or CTG game. For example, bosses will spawn special attacks if you are clicking too fast. Certain mods will explode and leave you in a stacking cloud of poison gas if you get too close – and you don’t need to; you can start clicking from anywhere in the room. You can either auto-attack, which is slower or speed things up by tapping your left mouse button as fast as you can handle.

All the while, countless variables are at play. You have to hammer at shields, knock down your poison by clicking the green glowing mouth on the UI, and of course handle your health and mana while also swapping cards in and out for various tactical effects.

You can start collecting and fusing runes to upgrade cards for other character improvements, even as you choose how much more you can stand in a whimsically designed but very useful side-view map of all the descending levels you have attempted. 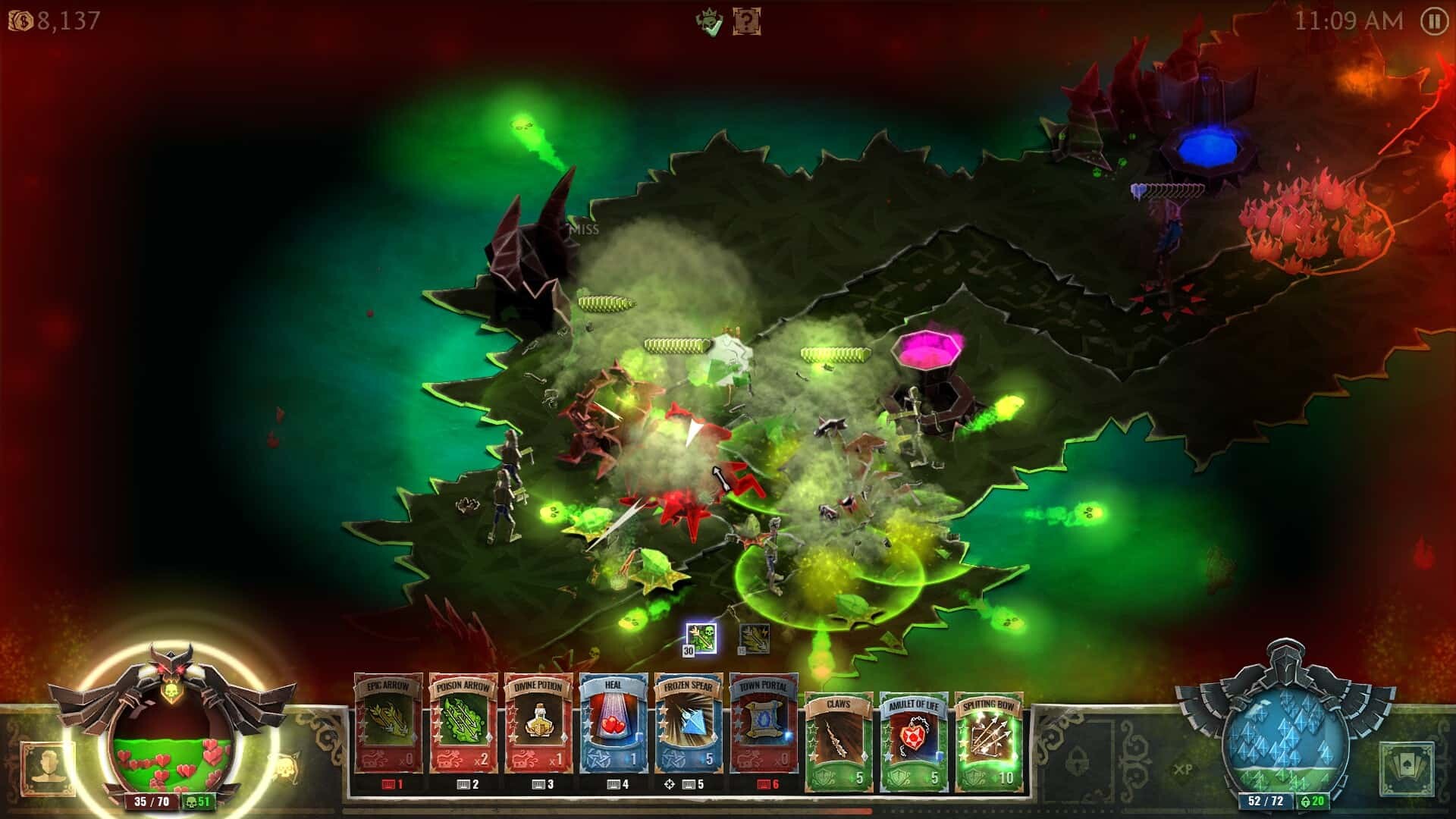 I find it very impressive that the Book of Demons was made by a small team of only seven core developers. This game has such tremendous attention to detail and polish. The fact that such a small number of people can create something so deep and beautiful is wondrous.

Right out of the box, Book of Demons is an easy-to-pick-up, satisfyingly-difficult-to-master package. What at first appear to be visual gimmicks quickly reveal themselves to be well thought-out metaphors for the larger game.

The best part about the Book of Demons is that it’s only the first book. Thing Trunk has seven titles planned for development, with a focus of returning players back to the golden era of ’90s PC gaming. If this is only the first installment of many planned, I personally can’t wait to see what these developers have in store for the gaming community.

Book of Demons is available via Steam.

Watch the official trailer for Book of Demons below: 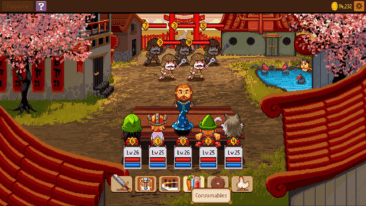 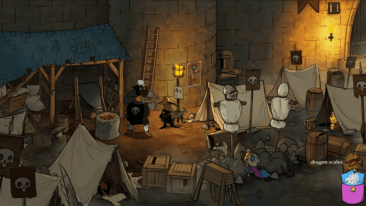 TSIOQUE Review – Once Upon a Time, in a Hand-Drawn World…