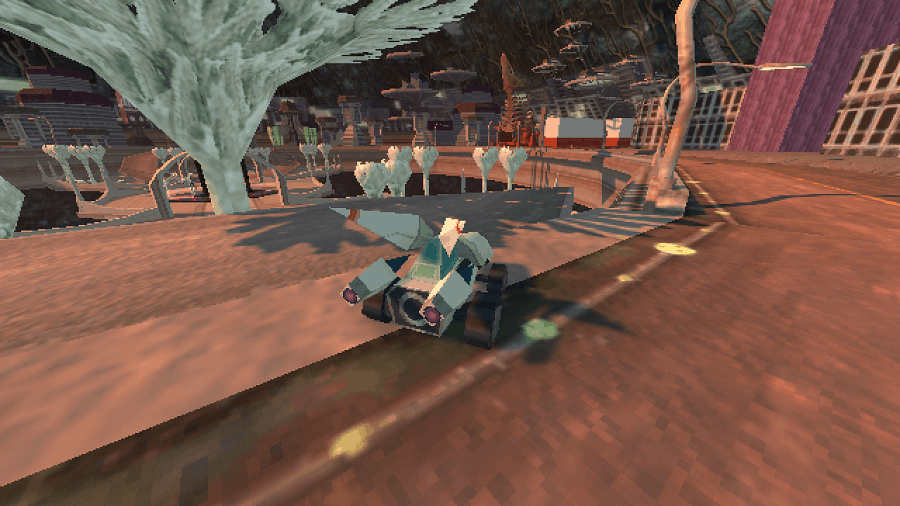 Anyone who played Anodyne will have some idea of what to expect from Anodyne 2: existential surrealism, introspection, a kind of facetious take on philosophy and atmospheric retro gaming.

Published by Analgesic Productions, the sequel to the popular title isn’t set for full release until mid-2019, but the preview content is sufficient to get a clear idea of how the series has evolved since its first installment.

The original Anodyne has also seen a full release on Switch this year. The game plays much as it did on PC, only now it has the added benefit of being portable for the first time. Anodyne is very much a love letter to classic Zelda and to find itself on a Nintendo console, at last, could be seen as something of a homecoming. I looked at Anodyne when it was first released; it is now as it was then: a fantastic adventure game with a unique and unsettling atmosphere. 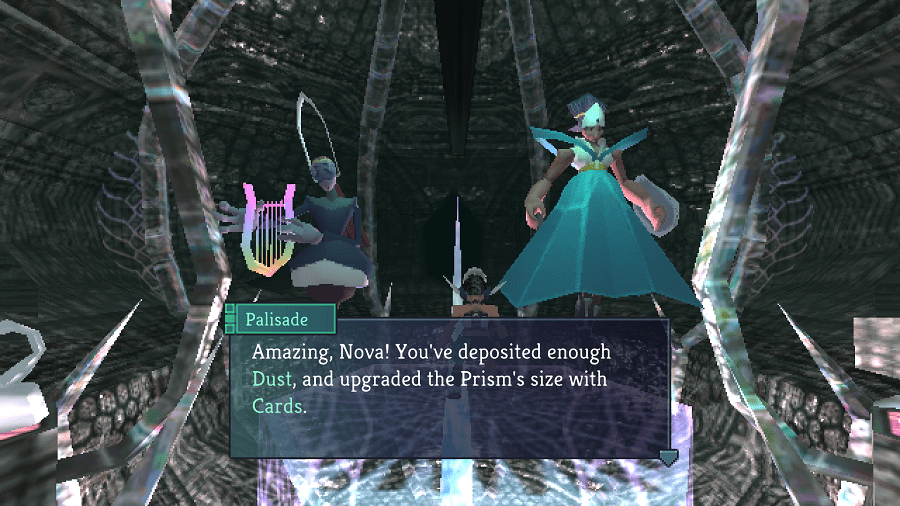 Unlike its predecessor, Anodyne 2 is inspired by two eras in gaming history rather than one: namely 16-bit and the PSX. The game fuses these two aesthetic and gameplay styles by using 3D, PSX visuals as an overworld while transitioning to 16-bit for the challenge levels themselves. Navigating the 3D world involves some platforming and a fair bit of exploration, but the real action of the game is in the 16-bit sections.

…and to Dust You Shall Return

The narrative is unsurprisingly bizarre; the protagonist, Nova, has been created to help save the world from the threat of “dust,” a seemingly parasitic force that infests various characters, causing them to surrender to their worst instincts or simply to degrade in unpleasant ways.

In order to cleanse these people, Nova must shrink to a microscopic scale and attack the dust directly (this is where the 16-bit aesthetic kicks in). 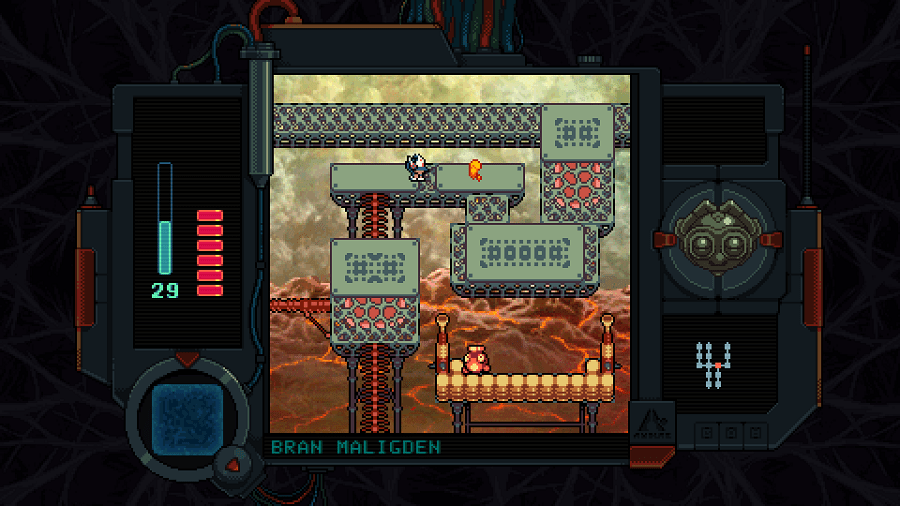 While inside each of the characters, Nova must navigate a grid-based map in classic Zelda-dungeon-style to find the root of the dust infection. Some areas are locked behind keys, and a creative selection of enemies bars the way to finding them.

A particularly amusing trick in one of these “dungeons” was a type of enemy that – if killed – seals off the end of the room, requiring that the chamber be restarted. Minor puzzles like this are attached to each enemy type, demanding that a little creativity is used in traversing each area.

Here in My Car, I Feel Safest of All

While in the overworld, Nova can – rather strangely – transform into a vehicle, facilitating speedier transit. The primary hub area of the preview version of the game is a city, and frankly, the vehicle function feels a little unnecessary in this environment. I can only presume that larger areas await in the full game (a presupposition that is supported by the fact that a surface world awaits above the aforementioned city).

Meanwhile, in the 16-bit segments of the game, Nova wields a kind of vacuum device for clearing dust. Given that this game has a more technological aesthetic than Anodyne did, this feels like a natural evolution of the broom wielded by the first game’s protagonist, Young.

Combat often involves sucking up enemies and firing them back at other threats, although the game does its best to subvert this mechanic with new problems such as burning foes that damage you if you try to vacuum them.

Dust in the Wind

I’ve mentioned much of Anodyne 2’s aesthetics so far, but it’s worth underscoring that both the PSX and 16-bit elements are lovingly crafted with a real sense of nostalgia in both aspects of the game.

The music is similarly impressive, once again evoking the unusual atmospheres that the game seeks to conjure. All of this being said, I didn’t feel quite the same sense of dark existential melancholy that the original Anodyne managed to summon. 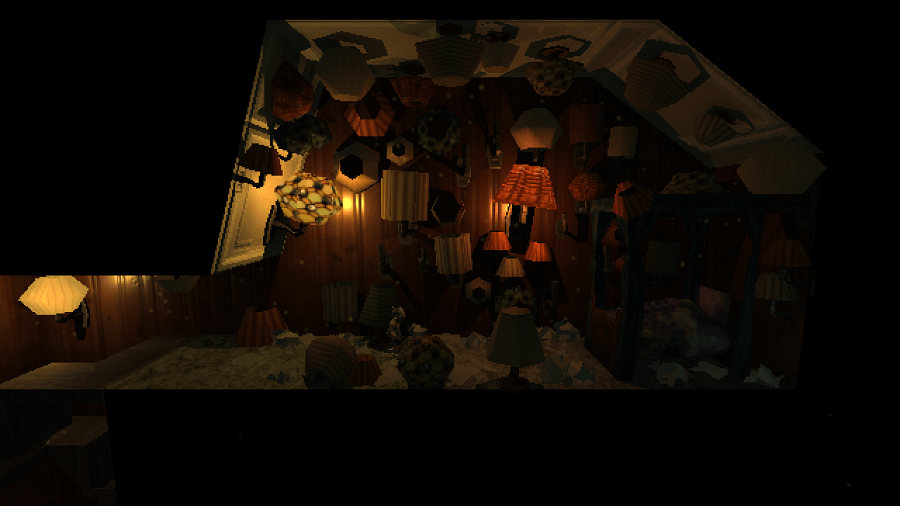 Anodyne 2: Return to Dust is shaping up to be an engaging adventure game in the same vein as its predecessor, an undeniably unique and frankly weird experience. The unusual combination of sometimes profound concepts with intermittent comedy seems to be a staple of this series, and anyone who was charmed by the first entry should definitely keep an eye on this next installment when it releases later this year.

Meanwhile, if you haven’t already checked out the original Anodyne, I can highly recommend picking it up on Switch.

Watch the official trailer for Anodyne 2: Return to Dust below: 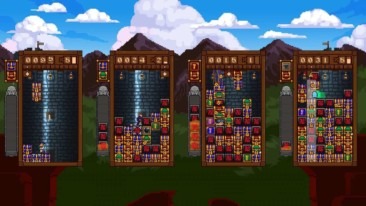 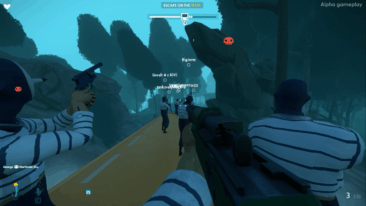