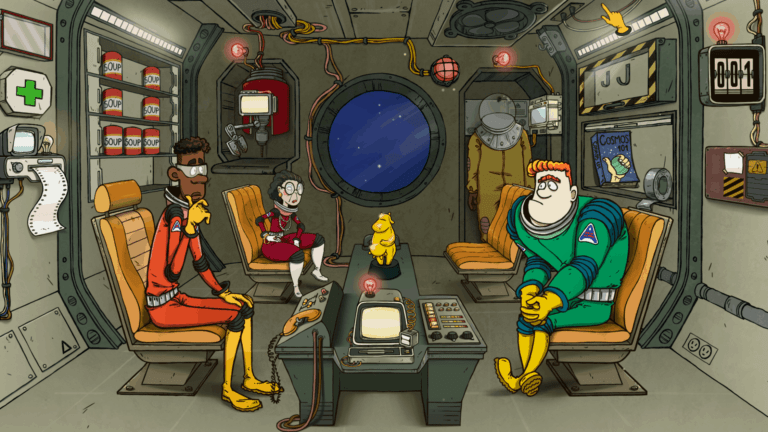 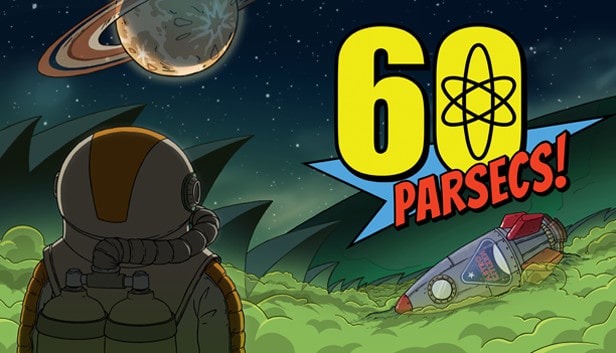 Witnessing the demise of earth from space, you’ve only got 60 seconds to prepare your shuttle before a nuke hits the space station…will you survive? Well, it depends. 60 Parsecs! is a dark comedy sci-fi adventure set in the Atomic Space Age and the latest game from Robot Gentlemen.

Building on the success of their previous game, 60 Seconds!, where you must survive in a 1950s bunker with your family, 60 Parsecs! has you dealing with soup shortages and other horrors of outer space.

From the former child athlete struggling to reinvent herself to the chemistry teacher who feels undervalued and underappreciated by his peers, the choice for who will run the mission is, well, quite grim. 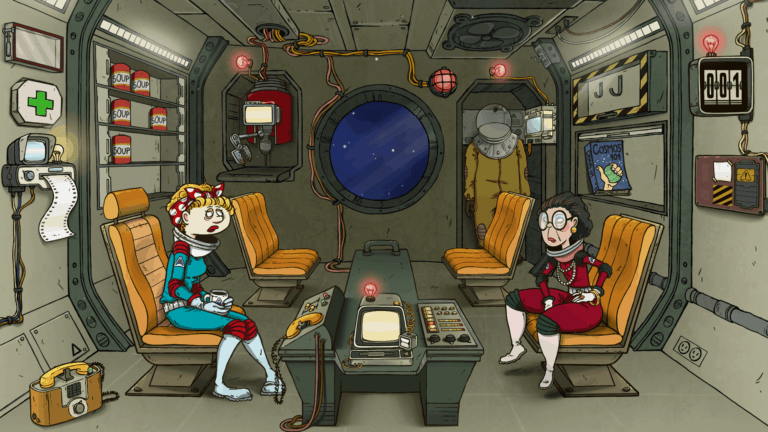 In my first attempt to survive the Post-Apocalyptic Space Age, I chose DeeDee Dawkins to command the crew. As a former athlete myself, I thought we would be kindred spirits, and maybe she just needed a little confidence boost. I was taken in by her galactic spin on Rosie the Riveter, and I threw my fist in the air in solidarity.

Boy, was I wrong. Don’t let that polka dot headscarf fool you; the only thing it was good for was mopping up her nervous sweat. 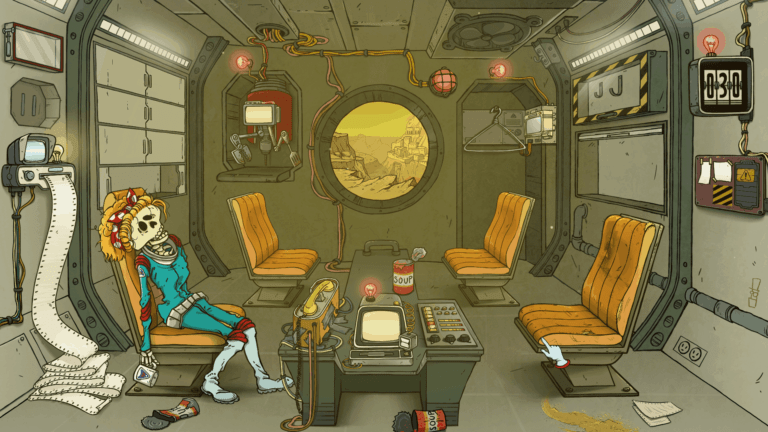 After perishing in space, I tested out a couple of the other misfits in my pursuit of survival, but alas, I could not maintain my crew’s sanity or their insatiable need for sustenance. Determined to make it in this world, I put my faith in Emmit Ellis, who ranked the highest on the intelligence scale and who nervously demanded respect. 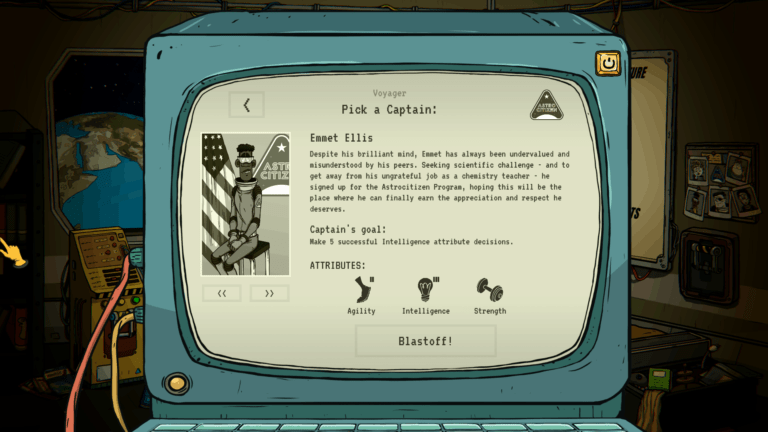 The More People You Save, the More Mouths You’ll Have to Feed

The game kicks off with complete panic and gives you 60 seconds to gather all the supplies you will need to – attempt – to survive. During this mad dash, you grab everything from soup cans to crew members before the clock runs out.

The last time I had to make a quick escape was from a burning residence building in college, and the only things I grabbed was a chocolate pudding cup and a couch cushion – not exactly prime survival items. So, when preparing for my speedy supply run, I tried to fill Emmit’s arms with as much as he could carry!

Once you’ve escaped with the other survivors – if any – the real challenge starts. Depending on what you scavenged during your departure and the choices you make during the game determines if you will make it in this new world.

Each day you are presented with a new situation requiring you to make a decision that will affect your survival; will you provide food to hungry crew members? Will you fashion a sock puppet to entertain a mate who’s slowly going mad? Or will you shoot the tiny communist who has invaded your ship?

Once you’ve made your choice, the computer calculates the next day’s fate, and you are ready for your next predicament. 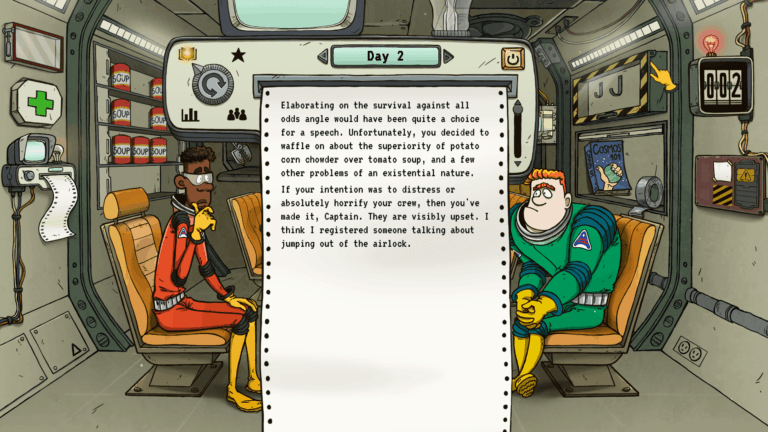 In my first struggle for survival, I lasted 11 days and based my decisions on short-term benefits. When I managed to make it out alive, I focused on long-term needs and let my crewmates suffer, just a little…I mean, who actually needs that much soup?

The narrative is propelled by a series of prompts that are humorous, dark, and will have you chuckling. If you enjoy text-based adventure games, the script is cleverly written and feels like a nod to Douglas Adams. 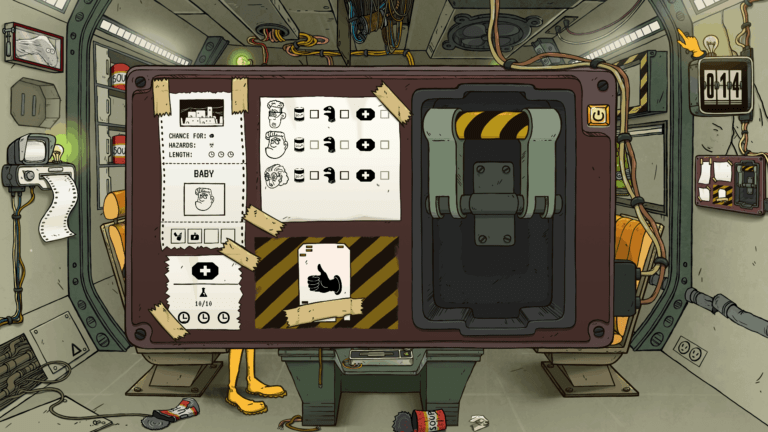 Death Has Never Looked So Good

When I started 60 Parsecs! I enjoyed reading the twisted dilemmas, but as I started to reach day 65, I felt claustrophobic in the escape pod, and my desire to end the game grew exponentially – even if it meant perishing in space.

I would have liked to have seen additional interactive scrabbles throughout the mission. Why not have a mad dash to collect items on a supply run?

Another issue that seemed to affect the success of your game was the choice in captain. Like others who have played 60 Parsecs!, I found my attempts fruitless – or should I say soupless – when selecting any other captain than Emmit. Each captain is given a score based on agility, intelligence and strength. Emmit and Deedee were the only characters to have full marks in one of the categories (but as mentioned above, I found DeeDee to be a hot mess). 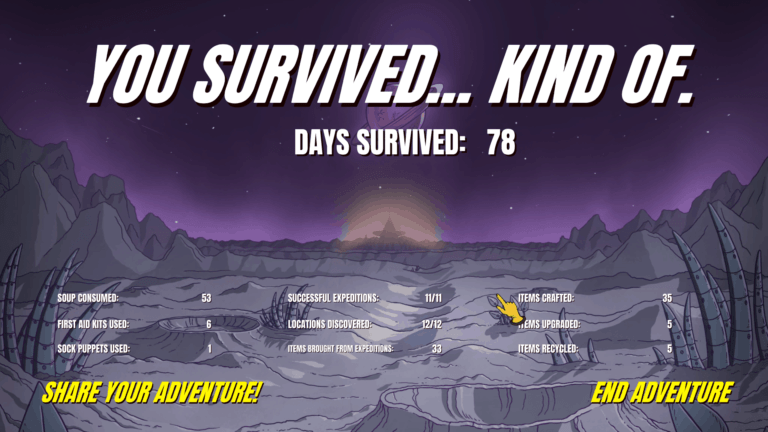 Overall, my first impression of the game was one of enjoyment, but with the constant repetition, it became slightly frustrating. If you are looking for a text-based adventure game that involves clever scripts, I would recommend giving it a try, but if reading long prose will have you going cross-eyed, I would suggest giving it a pass.

60 Parsecs! is available via Steam.

Watch the official trailer for 60 Parsecs! below: 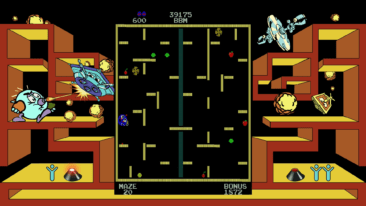 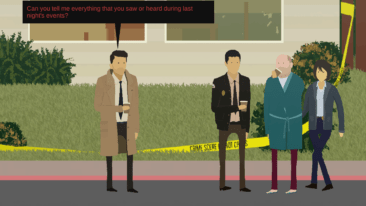